Built in 1810, for George DeWolf (1778-1844) and his wife Charlotte Patten Goodwin (1786-1857). DeWolf may have built "the jewel of Bristol" but he himself was no diamond, in fact he was one of Rhode Island's most reviled villains. There is a dark history behind this truly beautiful 45-room mansion. Architecturally, it is distinguished by its vast portico, splendid columns and intricate wrought iron gates, built by Russell Warren (1783-1860), the state's most renowned architect at that time. It could stand with ease alongside the mansions built a century later during the Gilded Age at nearby Newport; and, it was chosen as the backdrop to the scene in The Great Gatsby (1974), when Robert Redford dances on the street with Mia Farrow....
zoom_in 8 images 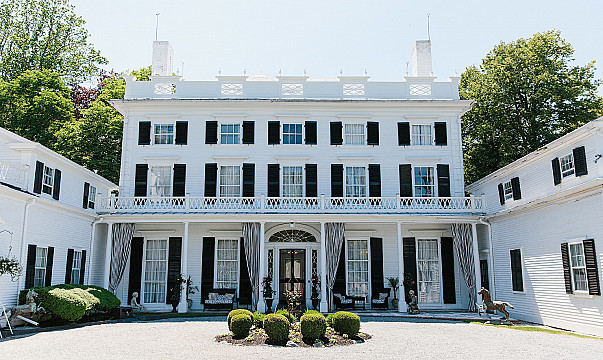 Known as "The General," George DeWolf in fact side-stepped a taste of real military duty in the War of 1812, opting instead to stay within the safe confines of Bristol in command of the local militia. The DeWolf family were the largest importers of slaves into America from 1769 to 1820, and with that wealth and the influence that it bought behind him, George purported himself to be a refined pillar of the Bristol community. But, history will remember George DeWolf - not unlike many of his family - as a cruel, selfish swindler with a flagrant disregard of human life and state, federal and international law.

In 1808, two of George's uncles - Senator James DeWolf (1764-1837) and William DeWolf (1762-1829) - had employed the architect Russell Warren to build them new mansions, "The Mount" (not to be confused with Edith Wharton's The Mount) and Hey Bonnie Hall respectively. Always intent on outdoing his uncles, in 1809 George paid $3,000 for land on which to build his own home and the following year put Warren to work again on his mansion at a cost of $60,000. George added to the land around the property and in 1817 welcomed President James Monroe (1758-1831) as a guest to his new home.

When profits began to fall with the end of the slave trade, the ever disreputable George turned his greedy eyes to the revolutionary wars in Central and South America. There, he sold arms to both sides for hugely inflated prices while actively involving his ships in piracy in the Caribbean. His reputation in Bristol for making money was now such that men queued up at his door to invest their money with him, "even the negro servants".

Outwardly, it seemed that all George touched turned to gold, but privately his flamboyant and immoral lifestyle was catching up with him. In 1825, the bottom fell out, and in the dead of night George took his family and fled America for his sugar plantation in Cuba - named with cruel irony, "Noah's Ark". His home in Bristol was plundered by the townspeople, owing money to almost all of them, but DeWolf and his family were already safe beyond U.S. jurisdiction and gave little thought for the crowds baying for his blood.

In 1826, George arranged to have his mortgaged mansion in Bristol sold to his cousin Charles DeWolf (1765-1833) for $15,000. It was not long before Charles too defaulted on the mortgage and in 1828 George's previously mentioned uncle - the Senator known as "Captain Jim" - stepped in and purchased the house from the bank for $5,100.

In 1830, Captain Jim turned another healthy profit for himself when he sold the mansion to his son, William Henry DeWolf (1802-1853), for $8,000. Three years later William received into his home Andrew Jackson (1767-1845), 7th President of the United States. In 1837, William started works improving the house: To the three story square block with the central hall leading on to four main reception rooms, he added wings either side that included further kitchens, servants quarters, a modest ballroom and a billiards room.

Somewhat following in family tradition, in the 1840s William upped and left for Cuba with his new mistress, leaving his wife, Sarah Ann Rogers (1802-1864), to fend for herself at the old house which had earlier been placed in her name. To make matters worse, it was soon discovered that William was up to his neck in debt, and on his death his already abandoned widow was now also left destitute.

"Poor Sarah," as she came to be known, took in lodgers and rented the octagonal library to a barber. Her relatives at Hey Bonnie Hall, who at that stage were by no means rich either, supplied her with food and fuel while she quietly took financial aid from the Bristol Female Charitable Society. By 1855, except for one room that she kept for herself, she had effectively leased the entire mansion over to a man who ran it as an hotel.

Sarah succumbed to death in 1864, and the following year a stranger by the name of Mr Edward Douglass Colt (1844-1869) rode into town and acting on behalf of a mystery bidder purchased the mansion for less than $8,000. It turned out that this Mr Colt was in fact acting on behalf of his mother, Theodora Goujaud DeWolf (1820-1901). Theodora was none other than the daughter of "The General" who had swindled the town some forty years previously before escaping to Cuba - with Theodora in tow!

Having lived a comfortable life in Cuba, she had been sent to finishing school in the States and was now a wealthy widow. Her deceased husband was Christopher Colt (1812-1855), a successful silk merchant who also happened to be the brother of Samuel Colt (1814-1862), the notorious arms manufacturer who built Armsmear in Hartford.

Unsurprisingly, Theodora's return to Bristol was not welcomed and she was blamed for her father's crimes. No doubt expecting such a reaction, she still managed to obtain a copy of a list of all the furnishings and art that was plundered from the house in 1825, buying back as much as she could. Described as "haughty and brilliant," she pumped some much needed life back into the old mansion. She also gave the gardens a much needed makeover and planted the linden trees in front that led her to rename the property "Linden Place".

Theodora was also a published poet and delighted in staging private theatrical performances. These productions brought many of her literary friends to Linden, including luminaries such as Henry Wadsworth Longfellow (1807-1882), Ralph Waldo Emerson (1803-1882) and John Greenleaf Whittier (1807-1892).

On Theodora's death, Linden Place passed to her son Samuel Pomeroy Colt (1852-1921). That same year, he purchased the entire block next to the mansion and erected a marble schoolhouse in memory of his mother. In 1905, he hired the noted architect Wallis E. Howe to build the ballroom at Linden, and a garage for his collection of cars.

On July 4th, 1910, Samuel Colt held a ball to celebrate the 100th anniversary of Linden Place which the Bristol Phoenix reported to be, "the most brilliant social affair in the annals of the history of the old town of Bristol". The guests included Colt's latest daughter-in-law, the celebrated actress Ethel Barrymore (1879-1959), many of Colt's various mistresses... but not his own wife! There seemed to be no love lost between the pair and in 1895, to Colt's extreme ire, his wife took up with one of his sworn political enemies, the charming eccentric Jimmy Van Alen (1846-1923) of Wakehurst!

The old DeWolf blood still ran strong in Samuel's veins, and as one of his descendants put it quite blankly: he too was a "S.O.B." He had a very successful career, but he was a well-known "robber baron," stealing the National Rubber Company from behind the back of Augustus Osborn Bourn (1834-1925), 36th Governor of Rhode Island.

The Colt family at Linden until 1987

On Samuel's death in 1921, he left Linden Place in equal shares to his children and grandchildren, stating that the mansion should remain in the family until only one heir, a grandchild, remained. Until that time, in order to keep it in the family, it was left in trust with the Industrial National Bank - founded by him. Colt's widow (and cousin), Elizabeth Mitchelson Bullock (1858-1935) had ceased living with her husband in 1902, but after his death she moved back to Linden with a widowed sister.

From 1935, various members of the extended Colt family continued to occupy Linden Place. In 1986, Samuel Colt's grandson, Samuel Barrymore Colt (1909-1986), died at Los Angeles, survived by his wife Eleanore Phillips Roberts (1910-1999), the Los Angeles editor of Vogue and House & Garden. According to his grandfather's will, Linden Place could now be sold and his first cousin who was now the last remaining grandchild, Mrs Elizabeth Stansfield of Arizona, daughter of Roswell Christopher Colt (1889-1935), duly placed it on the market, thus ending the family's seven generation occupancy.

The Friends of Linden Place

In 1987, a group known as the Friends of Linden Place formed in order to raise the $2 million necessary to purchase the house. The Town of Bristol elected to give $500,000 towards the purchase and in 1988 a bond issue for $1.5 million was approved by the State of Rhode Island in a referendum and the house was purchased for the community. The following year, Linden Place was given over to the Friends of Linden who continue to run it admirably today.

The storied house now operates as a museum and can be rented out for weddings and events. Admission to the house and grounds - guided or otherwise - are seasonal, so it is best to call before booking a visit. The facade of Linden Place features in The Great Gatsby (1974), when Robert Redford and Mia Farrow dance on the sidewalk. It also featured heavily in the 2008 documentary about the DeWolf family, Traces of the Trade: A Story from the Deep North, directed by Katrina Browne, a descendant of the family.

Inheriting the Trade: A Northern Family Confronts Its Legacy as the Largest Slave-Trading Dynasty in U.S. History By Thomas Norman DeWolf

Revolver: Sam Colt and the Six-Shooter That Changed America By Jim Rasenberger