Completed in 1807, for the Rev. Benjamin Titcomb (1761-1848) and his wife, Mary Fairfield (1767-1838). It was built by master-builder Samuel Melcher III and they leased out rooms to students of Bowdoin College notably in 1822 to the poet Henry Wadsworth Longfellow and his brother, Stephen. From 1850 to 1852, Titcomb's heirs leased the house - out of “sheer necessity” as it was the only house available - to Bowdoin's newly appointed Professor of Religion, Calvin Ellis Stowe. It was here in this house during that time that Stowe's wife, Harriet Beecher Stowe, wrote her ground-breaking novel, Uncle Tom's Cabin, the best-selling novel of the 19th century....
zoom_in 1 images 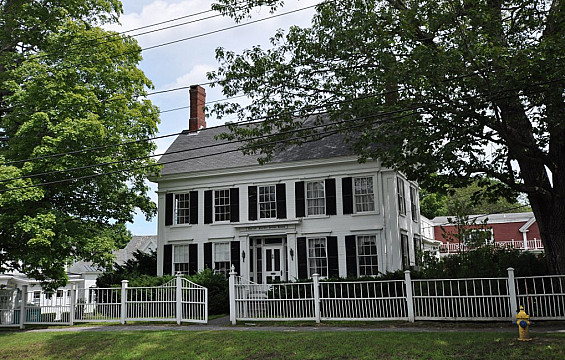 The Stowes made their house available on the Underground Railroad and one of the slaves they helped here in 1851 was John Andrew Jackson who later published his autobiography in which he recalled his stay here: “I met with a very sincere friend and helper, who gave a refuge during the night, and set me on my way. Her name was Mrs Beecher Stowe. She took me in and fed me, and gave me some clothes and five dollars. She also inspected my back, which is covered with scars which I shall carry with me to the grave. She listened with great interest to my story, and sympathized with me when I told her how long I had been parted from my wife Louisa and my daughter Jenny, and perhaps, for ever.”

In 1854, the Titcomb family sold the house to local businessman William H. Hall who enlarged it and gave it a Victorian makeover as it appears today. It remained a private home until 1946 when Mary Baxter White converted it into an historically themed inn and restaurant. It closed its doors in 1998 and Bowdoin College purchased the house in 2001. The motel complex that was added in 1967 was transformed into student accommodation while in 2015 the house was completely refurbished and returned to its appearance in 1855. Its now houses faculty offices as well as “Harriet’s Writing Room,” a public exhibit commemorating Harriet Beecher Stowe’s literary legacy. It is a National Historic Landmark and a National Underground Railroad Network to Freedom site.