Built in 1870, for Mary Ellen Pleasant (1814-1904), “the mother of civil rights in California”, but named for her co-habiting business partner, Thomas Frederick Bell (1822-1892). Mary Ellen also built Beltane Ranch in the Sonoma Valley but it was this 34-room mansion in San Francisco that for its size and grandeur stood out as an historic rarity in 19th century America: it was designed, built, and furnished by not only an African-American, but by an African-American woman....
zoom_in 2 images 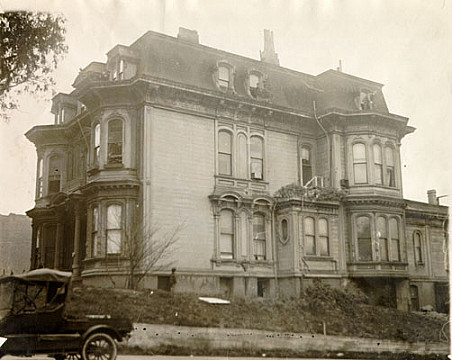 Mary Ellen Pleasant, "The Mother of Civil Rights in California"

Mary Ellen's many achievements speak for themselves, but she remains an elusive figure and stories about her run wild, both good and bad. A key to her success had been keeping a low profile, but this also gave fuel to her detractors of which there were no shortage. They were all too happy to repeat and add spice to any seditious stories made to smear her character. Perhaps some were true - but the majority were almost certainly not.
Mary Ellen's white-stone, Italian Renaissance mansion was erected on a two-acre lot of land in one of the city’s more affluent neighbourhoods, at the considerable cost of $100,000. The grand staircase at the heart of the house swept up the full three floors and from the back of the house it enjoyed a panoramic view over San Francisco Bay.
African-American HQ

In 1860s San Francisco, Mary Ellen gained a reputation for finding wives for wealthy men - as well as homes for any of their illegitimate children. Her mansion was built not entirely for herself, but as a boarding house in order to attract the city’s wealthier clientele. It was sometimes disparagingly referred to as the "Black City Hall" as it became a center for the city's African-American movers and shakers to meet and talk.

Mary Ellen's early life is particularly hard to piece together, as she intended it to be. But, she came to California as a cook, and certainly the kitchen in her mansion always remained her place of business: she trained up domestic staff for placement in the city's grandest houses while giving out counsel, advice, and even loans for those who set up laundries, boarding houses, saloons etc., from which she of course took a cut.
Bringing In Bell

Soon after opening her boarding house, Mary Ellen had taken in a friend she’d apparently met on the boat to San Francisco, one Thomas Frederick Bell. An enterprizing Scot, among several prominent positions he held Thomas was best known as the director of Nevada’s Virginia & Truckee Railroad; the Eureka & Palisade Railroad; and, the mighty Bank of California, of which he was also one of the majority shareholders.
Thomas made his home at the mansion with his wife Teresa Clingan-Harris (1856-1922), who by most accounts was introduced to him by Mary Ellen. The house became known as the "Bell Mansion" and they lived here with six children and a retinue of servants all under the tight rein of its all-powerful housekeeper, Mary Ellen.

"The House of Mystery"

After Bell moved in, he and Mary Ellen began investing their money together in various ventures with Bell always serving as the willing and open face of the business. This partnership reputedly made Mary Ellen a millionaire in her own right. However, much of what happened inside the house is shrouded in mystery, including Bell’s real relationship with Mary Ellen – were they just business partners or might they have been lovers too? This and Mary Ellen's own aversion to publicity of any kind led the local press to refer to the mansion as the "House of Mystery".
Bringing Down the House

In 1892, the increasingly infirm Bell toppled over the banisters from the top floor of the house and plunged to his death. This immediately raised a good deal of controversy, but the autopsy cleared Mary Ellen's name entirely of any guilt and no charges were filed.

Bell's cause of death may have been easy to settle, but his financial estate was most certainly not. The situation was further exacerbated by Teresa’s new lover - the crooked Bayard Saville - who helped turn her fragile mind against Mary Ellen. On April 19, 1899, Teresa ordered Mary Ellen out of her own house. She moved to an impoverished apartment, but took comfort that the majority of the Bell children still loved her.
When Teresa died in 1922, out of the $10 million left to her by her husband, she left her children just $5 each, claiming they were not “her” children. A fire damaged much of the interior of the house in 1925 and three years later it was demolished to make way for Green’s Eye Hospital. Today, the site is occupied by a Planned Parenthood Clinic, but six old eucalyptus trees planted by Mary Ellen that once stood within her gardens can still be seen next to the historical marker put up to her memory on the corner of Octavia & Bush.

The Making of "Mammy Pleasant": A Black Entrepreneur in Nineteenth-Century San Francisco By Lynn M. Hudson

Black Fire: The True Story of the Original Tom Sawyer - and of the Mysterious Fires That Baptized Gold Rush-Era San Francisco By Robert Graysmith