Built in 1892, as a weekend home for the elusive Mary Ellen Pleasant (1814-1904), “the (African-American) mother of civil rights in California” who divided her time between here and the Bell Mansion in San Francisco. This picturesque, pale yellow southern plantation-style house, surrounded by an ornate double-gallery, has historically been home to a succession of strong women, most notably Mary Ellen. But, it is also linked to a man who upheld the rights of Chinese immigrants and a Californian “wine hero”. Owned by the same family now since 1936, in 2018 Forbes Magazine voted Beltane one of the country’s “most luxurious farm stays”....
zoom_in 1 images 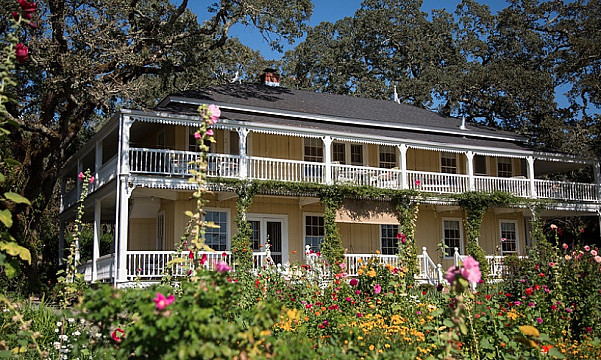 Glen Ellen in the Sonoma Valley was once grazing land used by the Wappo Indians before being absorbed into the 18,833-acre Rancho Los Guilicos. In 1837, Los Guilicos was granted by Governor Juan Bautista Valentin Alvarado (1809-1882) to Captain John Downes Wilson (1798-1861) and his wife, Dona Maria Ramona Carrillo de Pacheco (1812-1888), sister-in-law of General Mariano Guadalupe Vallejo (1807-1890). The Wilsons never lived here and in 1859 they sold off a 1,000-acre tract of their land to Colonel Charles Vaincoeur Stuart (1819-1880) who’d come to California from New York with the Gold Rush in 1849.
Stuart built nearby Glen Oaks Ranch and named his estate "Glen Ellen" for his “refined and cultured” wife Mary Ellen Tourtellot. He is remembered as the only delegate of the California Constitutional Convention of 1878-79 who spoke out passionately in defense of the rights of Chinese Immigrants. In 1879, the Stuarts acquired a new neighbour at Dunfillan in Captain John Hamilton Drummond (1851-1889), “one of the heroes of 19th century viticulture”. On 150-acres, he sampled 150 grape varieties including the North Coast’s first documented Bordeaux vineyard with Cabernet Sauvignon cuttings from Chateau Margaux, Chateau Lafite-Rothschild and the Hermitage. That same land has since produced grapes, fruit (notably raspberries), nuts and olives ever since.
Mary Ellen Pleasant

Drummond died in 1889 and two years later his 150-acre vineyard was sold to the remarkable African-American abolitionist and entrepreneur, Mary Ellen Pleasant. Most accounts say she paid $100,000 for 985-acres in Glen Ellen including Drummond’s vineyard and “several homesteads”. But a recent article in the San Francisco Chronicle stated that she in fact bought 2,000 acres including Drummond’s vineyard and five homesteads. Either way, by 1887, this part of California had become quite accessible by train from San Francisco and Mary Ellen desired the property for use as a weekend home, probably more for its spectacular views over the Sonoma Mountains than its vineyards.
Mary Ellen’s remarkable life story is an indiscernible blend of fact and fiction that will likely always ensure fascination. But whether viewed as a saint or a sinner, what she accomplished as an African-American woman in 19th century America was nothing short of exceptional. Her role in smuggling out hundreds of slaves via the Underground Railroad prompted her escape to San Francisco in 1852. On the journey, she met her business partner/lover, Thomas Frederick Bell. He moved into Bell Mansion, the home she built in San Francisco, and together they invested in several businesses that made Mary Ellen a millionaire in her own right, though all the while employed as his housekeeper.
Mary Ellen at Glen Ellen

It is generally assumed that Mary Ellen built the ranch house at Glen Ellen one year after purchasing the property. But, other sources say there was already a two-story structure here which she remodelled. Either way, it was Mary Ellen who spent $50,000 to give the house its present charm. It is immediately reminiscent of the houses she’d known in New Orleans and unusual in that its lacks any internal staircases – the staircases being on the outside within the wide, ornate double-gallery that surrounds the house. Here she often sat in her rocking chair taking in the long views over the vineyards and the valley.
Becoming Beltane

She apparently named the property "Beltane" but as it is a Gaelic word for the Scots May Day festival, it would seem that it was in fact Thomas Bell (whose parents were Scottish) who played the greater role in its choice of name. After Bell died in October 1892, Mary Ellen - who despised the disparaging annotation of “Mammy” that is still frequently attached to her name - along with Bell’s widow, Teresa Clingan-Harris, and the Bells six children, began to spend increasingly more time at Beltane. While they seemed to enjoy life here, it was also during this time that many of the vines fell prey to Phylloxera.
The End of the Dream

Debts and family infighting led to the demise of Mary Ellen’s country dream. Having already sold off 200-acres in 1899, she eventually signed the deed over to Teresa who promptly sold Beltane to local cattle ranchers. From 1900, the newly erected barn was used for dances and up until the 1930s horse races were a common sight across the fields in front of the house. As for the house, it fell into disrepair and the former home now became a camping ground for passing horse traders and cattle ranchers.
A Return to Wine & Hospitality

In 1936, Ralph Heins (1885-1966) and his wife Effia - “the quintessential ‘force’ behind the ranch” - came from the Central Valley to escape the Great Depression and purchased Beltane and its 1,600-acres to farm turkeys, sheep and cattle.

The Heins were also joined by their niece Rosemary Wood (1924-2017), whose parents had also come down to help out here. Rosemary married then Captain Harlington Wood Jr. (1920-2008) who ended his career as a Senior Judge in the U.S. Court of Appeals. While living in Virginia, she had developed her already existing passion for architecture and historic preservation. When she returned to Beltane in the 1960s she replanted the vineyards while almost single-handedly restoring the pale, yellow house to its former splendor, one room at a time, before opening it as a Bed-and-Breakfast in 1972.
Beltane Ranch Today

Today, Rosemary’s daughter (Alexa Benward) and granddaughter (Lauren Benward Krause) continue to run Beltane with the same devotion that she had for the property - which is now home to the sixth generation of their family. They manage the ranch and inn as well as hosting weddings and events such as farm dinners. They also produce and market the Beltane Ranch wine on their 105-acre vineyard, as well as pressing their own olive oil. In 2018, Forbes Magazine voted Beltane one of the country’s “most luxurious farm stays” – Mary Ellen, who made part of her fortune running boarding houses, would be suitably impressed both by the accolade and Beltane’s continued female spirit.

The Making of "Mammy Pleasant": A Black Entrepreneur in Nineteenth-Century San Francisco By Lynn M. Hudson

The Vines We Planted By Joanell Serra

A Tale of Two Valleys: Wine, Wealth and the Battle for the Good Life in Napa and Sonoma By Alan Deutschman

A Summer in Sonoma By Robyn Carr