Completed in 1903, for Clinton Ledyard Blair (1867-1949) and his first wife, Florence Osborne Jennings (1869-1931). This spectacular cheateau-style mansion is surrounded by mountain forest in the beautiful Somerset Hills overlooking Ravine Lake. Standing on an estate that once covered 550-acres, at 56,000 square feet it is among the Largest Houses in the United States, only a few thousand square feet behind the likes of Lynnewood Hall. Once known for the extravagant parties held here during the Gilded Age, after standing empty for several years rumors began to circulate that the house was haunted. Spoiler alert: the myths (told below) are entirely unsubstantiated! Today, Blairsden has been immaculately restored and is currently on the market....
zoom_in 12 images 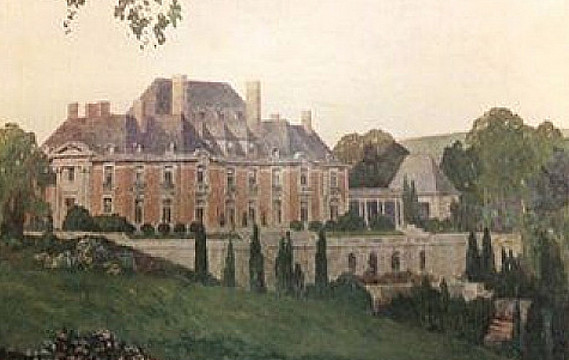 C. Ledyard Blair was the grandson of John Insley Blair (1802-1899), founder of the investment bank, Blair & Co., who established Blair Academy ("a highly selective" high school) and built Blair Hall at Princeton University. Ledyard continued in the traditions set by his grandfather and father, DeWitt Clinton Blair (1833-1915). He successfully continued the family firm while being elected a Governor of the New York Stock Exchange as well as holding the prestigious position of Commodore of the New York Yacht Club.

Blair's French-Renaissance, chateauesque mansion was designed by the noted Beaux-Arts architectural firm, Carrère & Hastings of New York. It took five years to build, with work starting in 1898 when the peak of the hilltop on which it stands - the highest point of the 550-acre estate - was flattened to site the mansion. As if that in itself was not ambitious enough, in order to bring materials up the steep incline of the mountain behind the house, a funicular railway with its own engine was specifically constructed for that purpose. Afterwards, the railway provided another method by which the six to eight hundred guests were transported to Blairsden at each of the weddings of the four Blair daughters.

The Mansion and Estate

The mansion itself was entered through giant bronze doors with plate glass windows one inch thick - each one individually weighing over half a ton. The grand entrance hall featured an elegant double-curving staircase and inside the mansion was decorated in the Beaux-Arts style, popular with many Gilded Age Estates. Needless to say, it was adorned with antique furniture as well as many art treasures, tapestries and paintings.

There were 38 rooms (including 31 bedrooms), 19 bathrooms, and the 25 fireplaces each had their own uniquely designed mantel. In the basement was a squash court and a Turkish Bath, known as the Plunge Pool. All modern conveniences for the time were made available, complete with elevators, and every Thursday a man would arrive from New York specifically to wind up all the clocks throughout the house. The estate was maintained by 22 household servants and a further 50 to maintain the grounds.

The original gates to the estate were below Ravine Lake and the visitor passed through a parallelogram-shaped entrance several hundred feet in length by two hundred in width. The mile-long driveway is overlooked by twelve busts of Caesar and proceeds up the hillside to give a scenic tour of the estate via the rear before arriving at the side of the mansion; thus disguising the true, immense size of it until up close.

On arriving at the front of the house, the visitor is met by the 300 foot long and twenty five foot wide reflecting pool. In its day, the pool was home to the family's two white swans: Elsa and Lohengrin. The pool is bordered with a low stone coping on which were set huge stone vases that on the occasion of the wedding of Marjory Bruce Blair to Judge William Clark were planted with goldenrod and purple aster flowers. Today, it is surrounded by further busts of Roman Emperors purchased from the French Government.

The landscape architect of this grand and progressive estate was James Leal Greenleaf (1857-1933). From the vast and magnificent terrace at the rear of the house, he designed another unique feature by way of a series of 50-foot waterways dropping down to the purpose-built lake below, formed by damming part of the Raritan River so Blair could pursue his love of boating, fishing and swimming. Beyond this beautiful and clever feat of engineering stretches an uninterrupted vista of predominantly maples and oaks as far as the eyes can see, down the Peapack Valley and over the Somerset Hills.

Immediately around the house more than 75 fully mature trees, some of sixty feet in height, were taken up to the estate individually, dragged by 16 horses at a time. Aged marble and stone figurines could be found hidden among the foliage and the rose garden displayed over 1,400 species of the flower.

The grounds included tennis courts, a boathouse, a clay-pigeon shooting range with it's own lodge, horse trails and a horse track. The coach house and two story stables (complete with elevator) were built by the aptly named firm of Vanderhoof & Sons for $30,000 and are today occupied by the Matheny School & Hospital. Some of the Blairs carriages and sleighs can be seen at the Shelburne Museum of carriages at Burlington, Vermont, and another is kept in Richmond with the Staten Island Historical Society.

Nuns, Murder & Ghostly Mayhem?
C. Ledyard Blair died here in 1949 by which time his once massive fortune had dwindled to just $1,067,000. His widow (his second wife, Harriet) and daughters took the decision to sell Blairsden. The following year, the mansion and 50-acres of the estate was sold for an estimated $65,000 to the Sisters of St. John the Baptist, who renamed it St. Joseph's Villa.

According to an unsubstantiated urban legend, sometime in the latter half of the 20th century, St. Joseph's Mother Superior murdered upwards of 30-children here in grisly circumstances and supposedly their ghosts continue to haunt the old place. But, as 'good' a story as that makes, the reality is that from 1950 St. Joseph's was a religious retreat and boarding house for elderly women, not children, and aside from various reputed stories, there are no newspaper reports of anything terrible having taken place here!

By 1995, the nuns were struggling to maintain the vast old mansion. After a few turbulent years - during which time Blairsden once again played host to several weddings and private parties - in 2002 the nuns sold it to the elusively named Foundation for Classical Architecture for a reported in $4.5 million, having rejected an offer of $4.25 million raised by a local group of not-for-profit preservationists.

The 'Foundation for Classical Architecture' was directly backed by the real estate mogul Victor Shafferman (1940-2009). But, he surprised everyone when it transpired that his plans really were to restore the mansion. But, nonetheless, these plans never came to fruition when he became ill shortly afterwards and died in 2009.

The house stood empty until 2012, when it was purchased for an even $4.5 million by T. Eric Galloway under a company named 'Blairsden Hall'. Galloway has already hired the nationally acclaimed landscape architect Anthony Sblendorio to restore the grounds, while the lavish interior will be rejuvenated by the equally well-known local architect William Welch. Blairsden was purchased in 2012 by T. Eric Galloway and both the grounds and the interior are being restored to their former glory. It remains private property.

In the Somerset Hills: The Landed Gentry By William a Schleicher and Susan J. Winter