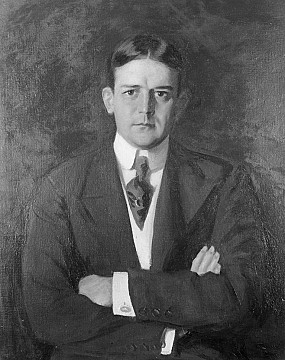 He was born at the Blair Estate, New Jersey, and educated at Lawrenceville School and Princeton University (1890). His grandfather built the first four railroads out of Chicago, founded Blairstown in New Jersey, and died with a fortune of $70 million. While still at Princeton, Ledyard Blair co-founded the investment bank Blair & Co., at New York, with his father and grandfather, primarily to manage their railroad interests. From 1920, Blair was Chairman of what had by then become Blair & Co., Inc. The firm gained a reputation for orchestrating the mergers of oil companies in both North and South America, while retaining their interest in railroads. Blair was a director of the Clinchfield Railroad, the Sussex Railroad, and the Green Bay & Western Railroad. His reputation as a financier saw him elected as a Governor of the New York Stock Exchange.

He was an avid horseman and coaching enthusiast, who ably drove a four-in-hand. He was also was a skilled and passionate yachtsman, owner of the 254-foot yacht, Diana, and named Commodore of the New York Yacht Club in 1910. In 1914, Blair boarded the German ocean liner Kronprinzessin Cecilie at New York, bound for Plymouth in England. During the crossing, war was declared between Germany and Britain, and as the boat was carrying $13.5 million in gold and silver they were advised to return to America, but not to dock at New York or Boston as German ships ran the risk of being captured by the British Navy. Blair took the helm and piloted the liner down to Bar Harbor, Maine, where his family kept a home. A short time afterwards, he sold Diana to the Russian government who sold it on to France for war service. It was sunk in action in the Mediterranean.

He was a member of the Jekyll Island Club. In politics, he was a delegate to the Republican National Convention from New Jersey which saw William Howard Taft elected as U.S. President. He lived between 2 East 70th Street in Manhattan; Blairsden which he built on 550-acres in New Jersey's Somerset Hills; Honeysuckle Lodge in Newport, Rhode Island; Blair Eyrie, his family's summer home at Bar Harbor, Maine; and, Deepdene, Smith's Parish, Bermuda. Despite his early business successes, by the time he died in 1949, he was worth a mere $1,067,000. In 1891, he married Florence Jennings and had four daughters: (1) Marjory, Mrs William Clark; (2) Florence, Mrs Herbert Rivington Pyne; (3) Edith, Mrs Richard Augustine Van Nest Gambrill, and (4) Marise, Mrs Pierpont Morgan Hamilton (grandson of J.P. Morgan), then Mrs Bogardus, then Mrs Campbell. After his wife died in 1931, five years later he married the also widowed Mrs Harriet (Brown) Tailer.