Built in 1854, for Michel Bouvier (1792-1874) and his second wife, Louise Vernou (1811-1872), the great-great-grandparents of Jackie (Bouvier) Kennedy Onassis. The 30-room mansion was situated on Broad Street near the corner of Girard Avenue. A cabinetmaker by trade, Michel had an excellent eye for quality and having established his fortune his home became, "a veritable museum of French Empire and early American furnishings". After he died, it was purchased with aid from Michel's son-in-law, Francis Drexel, to become the new home of LaSalle College, as it remained for 50 years....
zoom_in 1 images 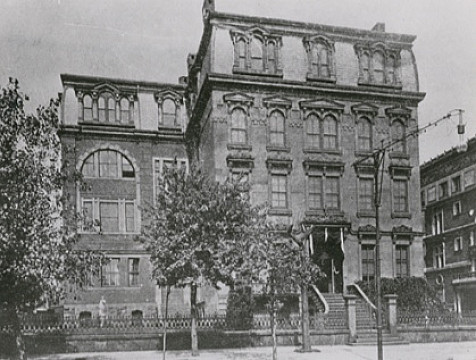 Michel Bouvier came from France to Phuladelphia at the conclusion of the Napoleonic Wars in 1815. A cabinetmaker by trade, he quickly established an impressive list of clientele including the ex-King of Spain, Joseph Bonaparte, and Stephen Girard whose bank saved America from collapse after the War of 1812. In addition to his primary trade, Michel imported marble and mahogany and most importantly supplied firewood. To provide for the latter business, he purchased 800,000-acres of forest which turned out to hold valuable reserves of coal. Combined with land speculation and real estate, he made a $1 million fortune that allowed him to indulge his passions for art and furniture.

It is a strong possibility that his house was in fact two brownstones knocked into one. The mansion comfortably accommodated himself, his wife, and his twelve children (by both wives) plus six live-in servants being a cook, three chambermaids, a coachman, footman and gardener. Aside from the required numerous bedrooms, there were two drawing rooms (another indication of the mansion perhaps once having been two separate houses); a music room with grand piano; a library; a billiards room; one suitably large dining room for the 14 members of their family; and, being good Catholics, a private chapel.

Aside from the beautifully crafted tables and chairs made by his own hand, his house contained a profusion of high quality artwork, silver, porcelain, and marble busts and statues. Among his most highly prized possessions was a, "beautifully carved (Empirical) golden eagle" that was a gift to Michel from Napoleon's brother, Joseph Bonaparte. In the garden behind the house, there was an Italian Baroque fountain of white Carrera marble imported by him, around which were arbors of vines, greenhouses, and a kitchen garden.

Michel outlived his wife and after his death their unmarried children remained there for a short time before his youngest son, Michel Charles Bouvier (1847-1935), moved to 14 West 46th Street in New York (which by 1931 was "the one remaining private dwelling in the neighborhood") taking his four surviving unmarried sisters with him, and much of the furniture. When the younger Michel died in 1935, the contents of his house was either auctioned off or ended up between the two homes of his nephew, John Vernou Bouvier Jr.

The Bouvier mansion was sold for $67,500 in 1882 to the Christian Brothers who had been helped in their purchase by one of Michel's sons-in-law, Francis Anthony Drexel (1824-1885) in order for it to become the new home of LaSalle College. It remained the home of LaSalle for half a century, but having outgrown the building by 1930 LaSalle tried desperately to sell the old mansion but no buyers could be found and it very nearly bankrupted them. It was finally sold for redevelopment and demolished in the process.

The Bouviers: Portrait of an American Family By John H. Davis