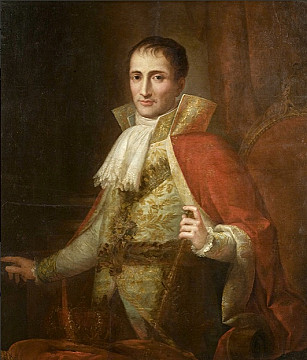 He was born at Corte, Corsica, the elder - and favorite - brother of Napoleon. He followed in his father's footsteps as a lawyer and diplomat before entering politics. In Paris, he was elected to the Council of Ancients (the equivalent of the Senate) and in that position helped his brother overthrow the government in 1795. As his brother's Special Envoy, at Mortefontaine he signed the Convention of 1800 that ended hostilities between France and the U.S. in the Caribbean. Having been appointed Commander-in-Chief of the army that invaded Naples, in 1806 his brother installed him as the King of Naples. His arrival was greeted with cheers and his popularity was enhanced by his decision to keep the vast majority of the officials and ministers in their jobs while introducing the Republican benefits of the French Revolution.

After two years (1808) he was advanced to Spain, but he was sad to leave Naples. Having been well-liked there, he now found himself as the new and extremely unpopular King of Spain and his arrival in Madrid triggered the Peninsular War. Unlike his time in Naples, his hold on Spain was only ever tenuous at best. After the British victory at Vitoria in 1813, he abdicated and his brother brought him back to govern Paris with the title of Lieutenant-General of the Empire. After his brother was decisively defeated at Waterloo in 1815, in the following year he fled to America under the name of the "Comte de Survilliers". He briefly lived in Philadelphia and then leased Lansdowne House before buying Point Breeze at Bordentown in New Jersey where he was a well-loved member of the community and spent much of his time gardening. Apart from five years in England, he lived happily in America for the next twenty years, finally returning to Europe in 1839. Re-joining his family at the Palazzo Serristori in Florence, he died there in 1844.

Empire's Eagles: The Fate of the Napoleonic Elite in America By Thomas E. Crocker

Naples and Napoleon: Southern Italy and the European Revolutions, 1780-1860 By John A. Davis

The Queen's Fortune: A Novel of Desiree, Napoleon, and the Dynasty That Outlasted the Empire By Alison Pataki