Rebuilt in 1865, for Lord Edward Seymour (1804-1885), 12th Duke of Somerset, and his wife Georgiana Sheridan (1809-1884), Duchess of Somerset. It replaced a 17th-century manor built by the notorious "Hanging Judge" George Jeffreys. It bears a distinct similarity to the smaller, less elaborate, but slightly older Cruickston Place built in Canada for a grand-daughter of America's first multi-millionaire, John Jacob Astor....
zoom_in 11 images 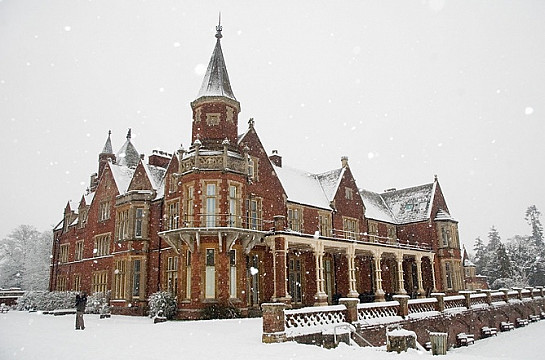 After the Duke died in 1885, Bulstrode passed to his daughter, Lady Helen Ramsden, and then to her son, Sir John Frecheville Ramsden (1877-1958), until he lost his fortune following the Wall Street Crash. In 1932, the estate was broken up and although Sir John did not sell the mansion he was unable to afford its upkeep and it sat empty until World War II when it was used for training the Women's Auxiliary Air Force. After Sir John's death in 1958 the mansion which had by that time fallen into a bad state of repair was acquired by the Bruderhof Christian Community. They relocated to America in 1966 and the mansion was bought by WEC International, another Christian society who gradually restored many of the main rooms. In 2016, Bulstrode was purchased by a private owner.

Bulstrode: Splendour and Scandals of a Buckinghamshire Mansion By DJ Kelly