Dating from the 10th Century, the castle dominates Vigoleno near Milan, towering 1,640-feet above sea level over the surrounding the countryside. From the 13th century up until the early 20th century it was the seat of the Scotti family and in the 17th century it attracted many of the leading literary and cultural figures of Renaissance Italy. This tradition was revived after 1922 when it was purchased by the Italian Princess Maria Ruspoli who at the age of 19 had married the 57-year old Duc de Gramont. She lavished her fortune on renovating the castle which then became a mecca for aristocratic bohemians including artists, intellectuals, and the Hollywood elite....
zoom_in 3 images 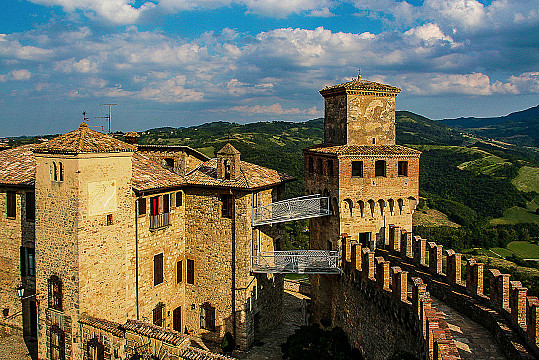 Both historically and artistically, the castle today is in near perfect condition. However, by 1934 Maria had squandered her fortune and returned to Paris to marry her second husband, Francois-Victor Hugo, great-grandson of the famous Victor Hugo. Soon afterwards she sold Vigolino and moved to New York before returning to France. Today it is open to the public and the film Ladyhawke with Michelle Pfieffer was shot here in 1985.

Biba's Taste of Italy: Recipes from the Homes, Trattorie and Restaurants of Emilia-Romagna By Biba Caggiano