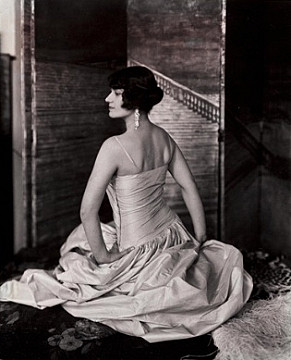 She was born in Rome, the daughter of Don Luigi and Clelia of the Counts Balboni. She was a first cousin of Mario Ruspoli, 2nd Prince di Poggio Suasa, who was married to the half-American heiress, Marie de Talleyrand, grand-daughter of Joseph Davis Beers Curtis, of New York. In 1907, at the age of 19, Maria married the 57-year old, twice widowed Duc de Gramont, whose four children were all older than her. Translated from the French, it was said, "the Duke de Gramont married his first wife for her old lineage, his second wife for her old fortune, and his third for her ass!" After giving Gramont two more sons, the marriage quickly unravelled as she conducted several affairs with men her own age. Her husband died in 1925 and the parties the young widow held at her home on the Champs-Élysées became famous among the aristocratic bohemian set. At one of Luisa Casati's legendary occultist parties in 1927 - "the Fête Cagliostro" - Maria made a dramatic entrance when four pages dressed as Egyptian slaves carried a sarcophagus into the room from which she emerged seductively dressed as a black snake.

In 1922, Maria purchased the Castello di Vigoleno near Salsomaggiore in her native Italy and after she was widowed three years later she returned there and lavished her fortune on its restoration. Her guest list here included  the likes of Gabriele D'Annunzio, Douglas Fairbanks, Max Ernst, Alexandre Jacovleff, Jean Cocteau, Mary Pickford, Elsa Maxwell, Arthur Rubinstein, etc. But, within just nine years (1934) she had squandered her fortune and returned to Paris where she married Francois-Victor Hugo, great-grandson of the famous Victor Hugo. She later moved to New York, working at the Jolas Gallery before dedicating herself to a beauty institute. In 1945, with Robert Rothschild (a distant cousin of, but not part of the banking dynasty) and Elizabeth Arden, she co-founded the Hugo Gallery featuring surreal art in New York which continued until 1954.

She divorced her second husband in 1947 and later retired to her villa near Aix-en-Provence, a gift from dancer-choreographer George de Cuevas, where she died in 1976. She possessed one of the finest private collections of French impressionists, which she later bequeathed to the nation. She is the grandmother of the Pulitzer Prize-winning writer, Ted Morgan, and her youngest son, Giorgio, was a spy in the Cold War.

When Paris Sizzled: The 1920s Paris of Hemingway, Chanel, Cocteau, Cole Porter, Josephine Baker, and Their Friends By Mary McAuliffe

Occult Paris: The Lost Magic of the Belle Époque By Tobias Churton