Rebuilt from 1895, for Maurice Ephrussi (1849-1916) and Beatrice de Rothschild. Ephrussi maintained a vast stable of thoroughbred horses here that won several of the most prestigious prizes in France and England. They maintained Reux along with L'Hôtel Ephrussi-Rothschild in Paris and a villa in Monte Carlo. However, by 1904 Ephrussi had run up some $2.5 million in gambling debts and the Rothschilds took him to court to have him legally separated from Beatrice. He died here in 1916 when the chateau became the property of the Rothschilds. Described by Beatrice's nephew as "the most romantic property imaginable," it remains in the Rothschild family today....
zoom_in 2 images 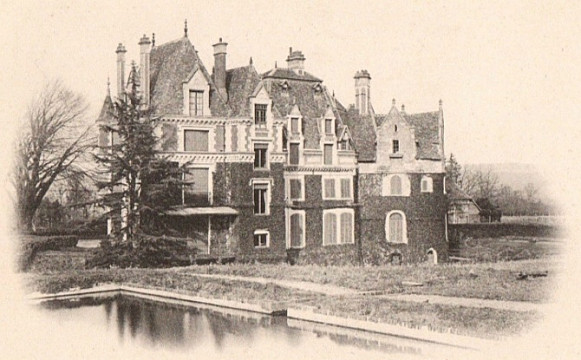 First occupied by the Reux family from the 14th Century, it passed through several families until the 17th century onwards when it was home to the de la Ferté and then the La Myre-Mory families. In 1868, Madame de Wissel (born La Myre-Mory) sold the chateau to Paul Borel (d.1869), one of the partners who built the Suez Canal. His widow sold it in about 1895 to Maurice and Beatrice (de Rothschild) Ephrussi who made several additions to the existing original tower house. Ephrussi kept a large stables here and whereas he was a familiar face on the racecourses, Beatrice was a familiar face at the casino in Deauville.

In the late 18th century, the well-known author the Comte de Lauraguais (1733-1824) observed that the chateau was decorated with many fine pieces of 16th century glazed pottery ('faience') made by Bernard Palissy (1510-1589). From the 1890s, the chateau sat on an estate of 320-acres and was accessed by two stone bridges that crossed the moat.

After 1905, Beatrice spent most of her time on the Cote d'Azur where she built the Villa Ephrussi-Rothschild. After she died in 1934, she left the chateau to her brother, Édouard Alphonse James de Rothschild, but he rarely visited and it was left "practically abandoned". He died in 1949 when it passed to his only surviving son, Guy de Rothschild.

At the time of his father's death, Guy was married to his first wife, the Austro-Hungarian Baroness Alix von Koromla (1911-1982). She immediately fell in love with Reux and though she and Guy were divorced in 1956, she remained here and devoted the last thirty years of her life to the chateau and the village, even serving as Mayor of Reux in 1953.

Aside from Reux itself, Alix was a passionate supporter of Israeli art and artists, and it was here that the pianist Eugene Istomin began his long and close friendship with the Israeli painter Avigdor Arikha. At the chateau, Alix commissioned artwork by Norbert Kricke and Francis Bott designed the stained glass windows in the chapel.

Today, the chateau is the country home of Guy and Alix's only son, David (b.1942), who was married here in 1974 to the eighteen year old Italian Princess, Olimpia Aldobrandini (b.1955). Aside from serving as a Chairman of De Beers and Chairman of the Governing Board of the World Jewish Congress, he was also Mayor of Reux for eighteen years.

The Rothschilds By Virginia Cowles

The Lost Castle: A Split-Time Romance By Kirsty Cambron

The Women of Chateau Lafayette By Stephanie Dray

The Ten Thousand Doors of January By Alix E. Harrow