Built in 1907, for William Kissam Vanderbilt (1849-1920) and his second wife, Anne Harriman (1861-1940). Located 20-miles from Paris, they referred to their home as "Chateau Saint-Louis-de-Poissy," which although is in Carrières-sous-Poissy today, was then in the hamlet of Les Grésillons. The land on which it stands was developed for horse-racing from 1882 by a wine merchant named Monsieur Lemercier, but his venture failed and he sold up to the Hennessy family of cognac fame. In 1885, it was purchased by Edmond Blanc (1856-1920), son of the celebrated hotelier who built the iconic Casino de Monte-Carlo in Monaco. Blanc opened the Saint-Cloud Racecourse near Paris in 1901 and five years later sold this facility to the Vanderbilts....
zoom_in 13 images 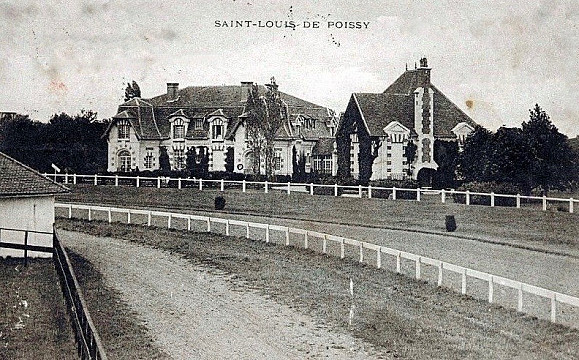 William K. Vanderbilt inherited some $70 million in 1885 and after his brother died in 1899 he became the head of the family's vast railroad interests. But, just four years later, he married Anne and relinquished all his responsibilities in America to live out the rest of his days with her pursuing their passion for thoroughbred racing. Having built the Quesnay stud farm near Deauville, he required a training facility and chose this one for its existing track and stables, and its proximity to Paris and the Maisons-Laffitte Racecourse.

The Vanderbilts commissioned Henri Guillaume to build them a surprisingly modest chateau in the style of Louis XIII. The French workers were stunned when they paid for a temporary wooden structure to house them during bouts of poor weather. As for the Vanderbilts, while the works took place they lived in a steel structure shipped over from the States lined with cork to insulate them from the cold and noise. It still stands today.

The Vanderbilts were looked after by a retinue of household staff including Mrs Vanderbilt's lady's maid, Madame Edmée, and Monsieur Maes, the electrician. Along with the post that was delivered to them everyday also came Mrs Vanderbilt's hairdresser, and on Mondays a man from the village would come up specifically to set the clocks!

Again to the amazement of the French, there was electricity and both the chateau and the stables were centrally heated. Two diesel motors kept them, their horses, and their workers warm during the winter, and provided ice and refrigeration in the summer. They spent a million francs on the 10-acres of gardens landscaped by Eugène Touret, with aviaries for exotic birds and large greenhouses full of vegetables, plants and flowers, all maintained by 10 full-time gardeners. A long path (the Chemin Plat, now known as the Avenue Vanderbilt), separated the chateau from the horse racing facilities.

Already existing were three oval tracks: a turf track of 2,400m (roughly 1.5 miles/12 Furlongs); and, dirt tracks of 1,200m and 800m, all with stands for trainers and spectators.  They rebuilt the stable complex in the best quality for 150-horses and a stone water tower on the banks of the River Seine was built not only for cleaning out the stables, but also for wetting the dirt tracks to keep the dust down. The Vanderbilts employed a staff of 120 and 10% of the village populace. Fifty of those were stable boys for whom they provided their own school on the premises, run by one Mme. Laurence.

It was here that many of the most famous racehorses of the day were trained (eg. McKinley, Maintenon, Sea Sick and Negofol etc.) and in 1905 Vanderbilt helped the third Aga Khan's then fledgling interest in racing take off by giving him a tour of Poissy: "Mr. Vanderbilt said to me, I think you'll get more pleasure out of a free run of my stables than out of a free run of my house". Vanderbilt's vast investment in racing didn't cover his costs, but certainly covered him in glory: he took the Prix du Jockey Club three times.

World War I saw the stables closed down, but all the staff whether drafted or not were kept on full pay. At the conclusion of the war, the Vanderbilts retired to Paris and sold their entire horse racing operation, including all the horses, Poissy, and Quesnay to another pair of American racing enthusiasts, A. Kingsley Macomber, and his wife, the oil heiress Myrtle Harkness. They built an extra wing onto the chateau to house their many trophies and their friend Ernest Hemingway was a not infrequent guest. However, the Crash of 1929 hit Macomber's fortune and a year later they shut down all operations here.

The chateau was left abandoned and the tracks and stables were reclaimed for agricultural purposes. It later became a shabby headquarters for the local quarry but in 2014, it was given a new lease of life by the town when it was re-opened as a communal center for digital art. Today it is known as the Château Éphémère, a "digital and sound factory".

Legacies of the Turf: A Century of Great Thoroughbred Breeders By Edward L. Bowen

The Museum of the Horse By Philip Jodidio. Preface by Prince Amyn Aga Khan