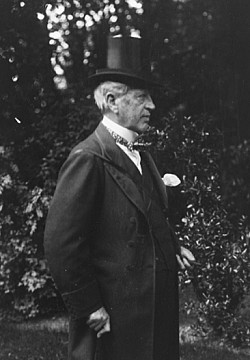 He was born at New Dorp, Staten Island. Whereas his elder brother, Cornelius II, was put to work at sixteen, Willy enjoyed an extended education in Geneva, Switzerland. On returning to New York aged nineteen (1868), he started his career with the Hudson River Railroad. By 1877, he was Vice-President of the New York Central Railroad. By 1883, he was Chairman of the Lake Shore & Michigan Railroad and President of the New York, Chicago & St. Louis Railroad. He and Cornelius were the chief benefactors of their father's will (each receiving some $70 million) and co-managed the family's investments. He became the head of the family business after his brother's death in 1899. In 1903, he remarried and moved to France, and to rid himself of his business responsibilities he voluntarily allowed the Rockefeller-Morgan/ Pennsylvania Railroad conglomerate to take control of the New York Central System. He was still a majority owner of the New York Central Railroad and maintained considerable stock in the Penn of which he was a director, but otherwise its direction was no longer in his hands. In the years leading up to World War I, Willy allowed the New York Central to be dominated by J.P. Morgan. He died in 1920, during the beginning of the railroad's slow decline.

In 1874, he married the indomitable Alva Erskine Smith who in 1883 outplayed the Mrs Astor to finally win the Vanderbilt family social acceptance among New York's old-moneyed elite. They lived between the Petit Chateau, Idle Hour and Marble House. In 1895, Alva did the unthinkable by divorcing her husband for his infidelity, but then much to her own surprise found herself dropped from society like a hot rock. However, being Alva, she quickly engineered another plan that ensured she would have to be let back in: much to Willy's disapproval, she famously paired off their only daughter, Consuelo, through tears to the equally unhappy 9th Duke of Marlborough. Aside from Consuelo, they also had two sons: William K. Vanderbilt Jr., and Harold Stirling Vanderbilt, both of whom were executives with the New York Central Railroad, but long after the real power had slipped away from the family. Harold was the last Vanderbilt on the board when it finally fell out of their hands in 1954. In 1903, Willy re-married the already twice widowed Anne Harriman and built the Château Vanderbilt in France where they retired to race thoroughbreds. Its stables became legendary and he won several major trophies including the coveted Prix du Jockey Club three times. He died in Paris, leaving $54 million.