Built in 1839, for "The Commodore," Cornelius Vanderbilt I (1794-1877), and his first wife, Sophia Johnson (1795-1868). Situated midway between Stapleton and Tompkinsville, this was the first showpiece mansion built by the founder of the Vanderbilt family fortune and was described as, "by far the finest residence on Staten Island". After only six years at their new home fronted by a portico with "six enormous fluted columns," the Commodore sold up and moved back into New York City. It was long associated with "Live Oak" George Law and then George H. Daley before being badly damaged by fire in 1882. It was still standing circa 1905, but its fate remains unclear....
zoom_in 2 images 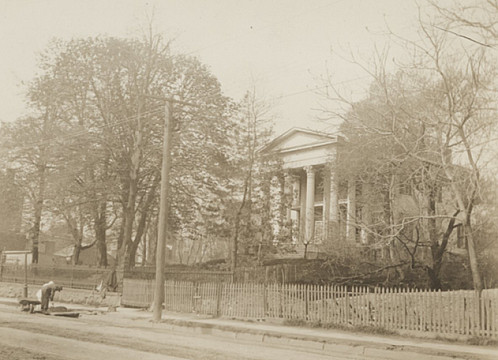 The Commodore had grown up on Staten Island and though he was not a millionaire in the 1830s, he was already a very wealthy man and felt confidant enough to make a display of his prosperity. The site on which he chose to build his new home was situated on the northeast corner of his father's farm and just a three minute walk from his mother's house - located roughly where the Paramount Theatre on Stapleton's Bay Street is found today. Vanderbilt had already purchased this lot from his father several years previously so that long before he built on it, it was already referred to locally as "Corneil's Lot".

The house overlooked the bay at Stapleton and was approached by a terraced slope with lawns bordered by horse-chestnuts and lindens that the Commodore planted as saplings. 220-yards below, at the foot of the slope, was the "shore road" that ran along the water's edge. As much for protection as for privacy, Vanderbilt built a low stone wall along the road topped by a high iron fence, but it was low enough that from the portico of his house the view remained unobstructed and "within speaking distance" of the boats that came in at his ferry landing just a little further up along the shore. To the north, divided by a ravine, was the Van Duzer's homestead and to the south his son-in-law, Daniel B. Allen, built a very similar but smaller and considerably less expensive version of his own house.

Irregular, yet Dressed to Impress

Vanderbilt spent $27,000 on his showpiece mansion. It was 40-feet tall, the ceilings on each floor were 12-feet tall, and the rooms "very large". The architect is unknown and its architecture was somewhat irregular, combining a "modified Gothic" style with a Grecian portico and "six enormous fluted columns". Here, "Corneil" indulged in his three pleasures: good whiskey, good cigars, and trotting horses.

Except for some of the interior features, it was constructed almost entirely of yellow Virginia pine and "the main timbers were massive". The rosewood doors in the parlor were fitted with silver knobs and handmade steel locks. Almost all of the materials used were imported: the heavy mantels were of Egyptian marble; the balustrades, South American mahogany; the glass was French plate; the stained glass, English; and, carpenters were shipped over from England to install the feature spiral staircase that ran in an oval well to the top of the house. From there, stained glass skylights drew in extra light to the wide halls that ran through the center of each of its three floors. Over the front door was a picture in stained glass made in England of the Commodore's favorite ship, Cleopatra.

Moving Up and Moving On

The Commodore was reported to have taken "great pride" in his new home and considered it "a fine house," even though he felt the portico had too many columns. Sophia simply adored it and was devastated when her husband's continued success dictated their return to Manhattan just seven years later: In 1844, "to the surprise of everyone," Vanderbilt sold off his share in the Staten Island ferry service in favor of bigger game. Work started on his new mansion at 10 Washington Place in May, 1845, which was finished by December, 1846.

Sophia's "hysterical" reaction to having to move to New York City resulted in her husband placing her in a private mental asylum until she saw fit to change her mind. She never changed her mind, but she did hot-foot it to their new mansion at 10 Washington Place when her daughters warned her of the Commodore's affair with their new governess...

In 1853, the three ferry companies running between Manhattan and Staten Island merged when Vanderbilt persuaded the two other owners (Minthorne Tomkins and George Law) to buy his ferry company out for $600,000. As his mansion house sat empty, it was thrown in as a sweetener for George Law and became part of the new company's assets.

In 1864, the Commodore's brother, Jake Vanderbilt, bought Law's ferries and brought them under the same umbrella as his railroad interests. Disaster struck in 1871 when a boiler on the Westfield ferry exploded below deck and killed 125 of its 200 passengers - which still stands as the worst accident in the history of the Staten Island ferry. Jake was charged with murder (but escaped conviction) and his company went into receivership. In 1872, George Law picked up the bargain and as the latest proprietor of the Staten Island & New York Ferry Company found himself back in possession of his old rival's old mansion.

In February, 1881, George Law sold the former Vanderbilt home to George H. Daley (1844-1909), son of Albany's crooked canal boat operator, George "One-Eyed" Daley. He spent $3,000 on the necessary repairs only to see the house go up in smoke less than a year later in January, 1882. The New York Times reported, "the roof fell in, and the upper or third story was completely burned out. The front and rear of the house was damaged to a great extent, and the whole interior was flooded besides being burned in places. The sum of $12,000 or $15,000, it is thought, will be required to repair the damage". Daley vowed to return it to its original condition, and a picture of the house circa 1905 meant he was good to his word. Otherwise, its history from then and its fate remain unclear. If you know more about this surprisingly elusive mansion, please log in and leave a comment.

Murder and Mayhem on Staten Island By Patricia M. Salmon