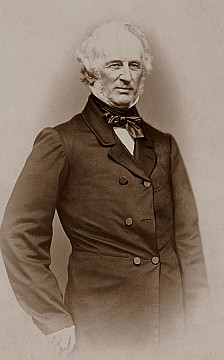 He was born at his parents' farmhouse in Stapleton on Staten Island. Using his father's sail boat, he started running passengers and goods to and from Manhattan at the age of sixteen. By 1817, he had been noticed by steamboat owner Thomas Gibbons and as his manager in New Jersey he learned the ropes of big business. He set out on his own account in 1829, running various ferry routes to and from New York City. By the end of the 1830s, he dominated the steamboat business on Long Island Sound; built the first Vanderbilt Mansion on his native Staten Island; and, began to take over the management of the connecting railroads coming up from the south.

In 1846, he moved into his new mansion at 10 Washington Place. In 1847, he succeeded in his campaign to take over the Stonington Railroad - the first of many he would own - and from 1849 he became interested in ocean-going steamboats, taking advantage of the California Gold Rush. By 1864, he disposed of his last remaining steamships to focus on the railroads in which he had become increasingly involved during the 1850s. He was a ruthless businessman and famously clashed with the equally ruthless Jay Gould over the Erie Railroad. In 1870, he merged his two biggest rail lines and created the New York Central & Hudson River Railroad - one of the first corporate giants in U.S. history. The following year, he finished building the Grand Central Depot which his grandson, William, later replaced with Grand Central Terminal where his 8-foot bronze statue still stands.

He died at his home on Washington Place in 1877. His only significant charitable bequest was the $1 million his second wife persuaded him to give towards founding Vanderbilt University in Nashville. In 1853, he bought the 270-foot yacht North Star, then the largest private yacht in the world. His passions outside of business were for good whisky, good cigars, racing trotting horses, and arguably a predilection towards housemaids. In 1813, he married his first wife (and cousin), Sophia Johnson, and they were the parents of 13-surviving children. In the year after she died, he married Frank Crawford, another cousin 45-years his junior, without issue. He wasn't overly interested in his daughters (leaving them $4 million to share between themselves) and only later considered his eldest son, Billy, a credible heir, leaving him with $95 million of his estimated $105 million fortune.