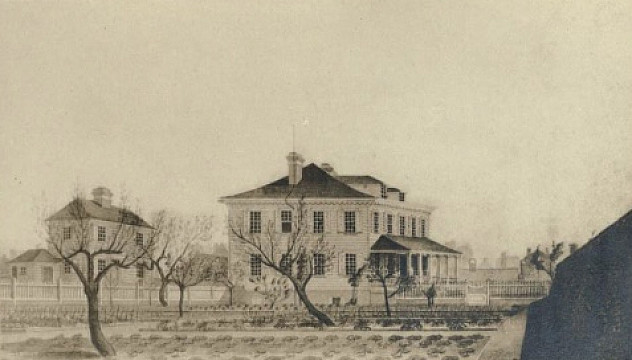 Jacob Aemilius Irving I, of Charleston; and, Ironshore, Jamaica

Thomas Corbett, of the firm of Mansell, Corbett & Co., was one of Charleston's most influential merchants who came there from Shropshire in England in about 1764. Mrs Corbett was the daughter of John Harleston (1708-1767), a Captain in the Berkeley Regiment of Foot and the wealthy owner of the Irishtown plantation near Charleston.

The Corbetts spacious and comfortable two-story, brick manor house with attic space was typical of the period in design and featured a large porch at the front. It stood amidst well laid out gardens and was flanked by several brick outbuildings.

On the outbreak of the American Revolution, the Corbett children were packed off to Irishtown some forty miles from Carolina where they were to be kept under the watchful eye of their uncle, Major Isaac Child Harleston (1745-1798). Corbett himself sided with the British and was nearly killed when a bullet grazed his chest while fighting for the so-called "Silk Stocking Brigade". But, at the conclusion of the war, his lands were confiscated and he was fined £20,000. He was exiled to England where he died in 1814.

In the meantime, Corbett House was returned to his wife's family who had been active patriots in support of an independent America. Known as "Peggy," Hannah Margaret Corbett (1775-1865) was the Corbett's eldest daughter. Having returned to England with her parents, she later returned to Charleston where in 1796 she married Jacob Aemilius Irving (1767-1816), whose brother had that same year sold Lowndes Grove.
Jacob lived at his new wife's childhood home before his family's sugar business necessitated his return to their planation in Jamaica, known as Ironshore. The fate of the Corbett House from then remains somewhat unclear, until this fine old southern mansion succumbed to the great fire of Charleston in 1840.