Built in 1786, for the widowed George Abbott Hall (1737-1791) on the Ashley River in Charleston. This beautiful two-story plantation house holds the somewhat dubious honor of being the site of some of the most prominent duels of the late 18th and 19th century, including between Generals Christopher Gadsden (1724-1805) and Robert Howe (1732-1786). It was also here that Denmark Vesey (1767-1822) served as a domestic servant before purchasing his freedom and it is named for William Lowndes who was nominated for the U.S. Presidency in 1821. Today, it is both a home and a venue....
zoom_in 9 images 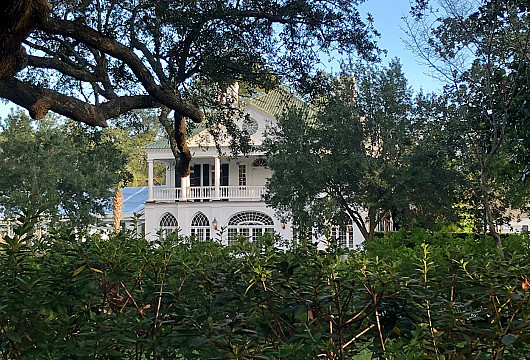 George Hall, of Charleston; Commander of the Continental Navy in South Carolina

A.G. Rose, President of the Bank of Charleston

In 1769, John Gibbes (1733-1780) acquired 232-acres of land overlooking the Ashley River. There, he built a manor house and named the estate "Orange Grove," in reference to the Seville oranges he (unsuccessfully) planted here. Gibbes and his wife, Margaret Anne Stevens (b.1739), were enthusiastic horticulturists and their garden included both a greenhouse and a pineapple pit, as well as a wide variety of exotic plants.

Duelling at "One of the most Beautiful Pleasure Gardens in the World..."

Christopher Gadsden was the irascible leader of the anti-British, pro-war faction in South Carolina and the designer of “Don’t Tread On Me” flag - known as the Gadsden flag - which was used by the Continental Army's marine corps. In 1778, when one of his officers (Robert Howe) resigned from his command, the hot-blooded Gadsden accused him of cowardice and Howe responded by challenging him to a duel. Being not too far from Charleston but sufficiently out of sight of the authorities, the Grove was then a popular venue for such trials of honor. On this occasion, Howe shot first and his bullet whizzed past Gadsden's face, missing it by inches. Rather than seize the opportunity to dispose of his opponent unhindered, Gadsden instead discharged his weapon into the ground and brazenly demanded that Howe try again! At this point those present managed to talk both men back to reason and the duel ended with them shaking hands and walking away.

As the Revolution spread across America, Gibbes was branded an "arch-rebel" by the British. When their armies approached Charleston in 1779, Gibbes fled with his family to his brother's plantation on the Stono River. His house was subsequently requisitioned by the British and one of the Hessian officers stationed there paid it high complement when he declared it to have, "one of the most beautiful pleasure gardens in the world". But, when the British soldiers withdrew, they ransacked the house before setting fire to it. In the front drive, they made a bonfire on which threw everything that was no use to them.
Irvings at The Grove

The house remained a ruin and rather than rebuild it, Gibbes bought Fenwick Hall. He sold Orange Grove to the husband of one of his nieces, George Abbott Hall (1737-1791). In 1786, Hall built a new manor house surrounded by oaks near to the ruins of the old one. But, just five years later he was dead and the plantation was sold by his brother-in-law, Governor John Mathewes (1744-1802), to John Beaufin Irving (1765-1813).

Irving referred to the house as "The Grove" and divided his time between here and Jamaica, where he managed "Ironshore" - his family's sugar plantation. The Grove provided him with an elegant home where he kept his racehorses, but as a farm it ran at a loss of some £200 a year. In 1796, his brother, Jacob Aemilius Irving - then living at Corbett House - sold this "very worthless place" on his brother's behalf to Captain Joseph Vesey (1747-1835), for "£800 down and his bond for £400 more, payable in one year".

"As Exotic a Household as that of Edmund Dantes"....

Captain Joseph Vesey was a Bermudian slave-trader, said to have been of the Coromantee people - an enslaved race from Ghana. Having made his fortune, he settled in Charleston and it is assumed that he bought the Grove as a present for his beautiful Malayan, common-law wife (they were unable to be married properly on account of her dark skin) who went by the unlikely name of Mary/May/Mai Clodner. They were not inconspicuous:

"Living as they did in a major Atlantic port, white Charlestonians were accustomed to unusual sights, but the family at the Grove - a former sea captain from Bermuda, his East Indian mistress, a giant, imperious domestic slave (Denmark Vesey, connected with the uprising at Irishtown), and an Euro-Indian child church records would later describe as "a free person of color" - comprised as exotic a household as that of Edmund Dantes."

By 1802, Mary Vesey was dead and the following year the "farm on Charleston Neck commonly called the Grove containing thirty-five acres" was sold to a close relative by marriage of the Irving family, William Lowndes (1782-1822), for whom it is named today. Both he and his wife, Elizabeth Brewton Pinckney (1781-1857), were children of former Governors and they lived here with their three children. It was the Lowndes' who gave the house its present Georgian features (eg., its distinctive windows, spiral staircase etc.) and they lived between here and the Horseshoe Plantation where Lowndes was born. Lowndes was a gifted orator and from 1810 went up to Washington D.C. representing the state in Congress, and he was nominated for the U.S. Presidency before his untimely death.

In 1831, nine years after Lowndes' death, his widow sold the house to Arthur Gordon Rose (1793-1880) who would later become the well-known President of the Bank of Charleston. Like the Lowndes', Arthur Rose and both his wives used The Grove as a summer home and it quickly became known as "Rose's Farm" or "Rose's Garden". After losing two of his children in quick succession in the 1860s, Rose, his second wife, and their daughter Eliza (then Mrs Trapmann) travelled to Europe and eventually settled in London.
The Charleston Exposition & "Wagener Terrace"

In 1881, one year after Arthur Rose's death, his heirs sold the farm (then 33-acres with 14-acres of marsh) for $12,000 to Frederick Wilhelm Wagener (1832-1921). Wagener was a highly successful and hugely popular German retail merchant whose store - the Wagener Building - can still be seen at 161 East Bay Street. He maintained a private racetrack on the property and as President of the South Carolina & West Indian Exposition, he remodelled the house for its use in 1902 and built a number of further outbuildings. President Theodore Roosevelt was among the visitors to the Exposition and had dinner in the house.

In 1917, now an old man, Wagener's sold the Grove to the Italian-American entrepreneur, James Sottile (1887-1964), whose father emigrated from Sicily to Charleston. Sottile and his brothers made a fortune as whisky distillers, before James bought 30,000-acres in Florida (the Sottile Farms) which after his death he gifted to the state. At the Grove, he left the present 14-acres that surround the house and developed the remaining 20-acres into streets and building lots that he named "Wagener Terrace" for its former occupant.

When Sottile died in 1964, he was reputedly one of the fifty wealthiest men in America. He donated Lowndes Grove to the Daughters of the American Revolution and in 1978 it was added to the National Register of Historic Places. In 2000, it was purchased by Alexander and Tina Opoulos for $1.9 million who sold it on to Patrick Properties in 2008 for $6.9 million. Today, it is both a home and a venue.

Dueling in Charleston:: Violence Refined in the Holy City By J. Grahame Long

The Politics of Taste in Antebellum Charleston By Maurie D. McInnis

The Charleston Exposition By Anthony Chibarro