Completed in 1931, for C. Ledyard Blair (1867-1949), former Commodore of the New York Yacht Club, and his first wife, Florence Osborne Jennings. Deepdene was built on 10-acres (purchased for £20,000) on Harrington Sound as a gift for Mrs Blair. It took three years to build at a reputed cost of $500,000 and contained 28-rooms, each of which had a built-in safe, including the bathrooms. The house was noted for its marble mantelpieces and the antique oak panelling retrofitted into the Drawing Room was said to have been the work of the great 17th century sculptor and wood carver, Grinling Gibbons. The outbuildings were no less spectacular: the 18-carriage coach house contained a glass opera coach and the boathouse is remarkable for its ornate iron tower....
zoom_in 1 images 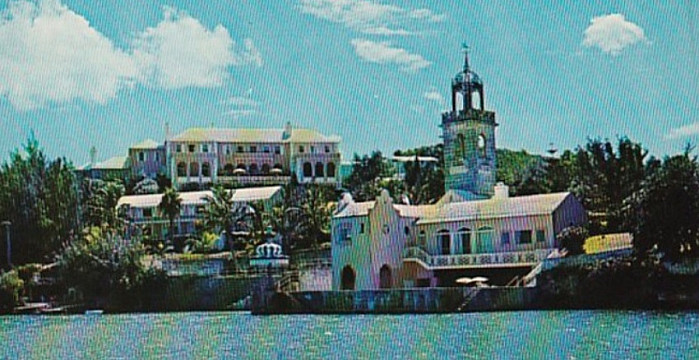 The wrought ironwork that crowns the tower depicts a Crab chasing a Lobster chasing a Bee. Each of their first letters represents the initials of its builder, C. Ledyard Blair.  In the tower itself is a copper-topped stone umbrella seat and the Blairs joked that it would be called "the wailing tower" as Mrs Blair reputedly found watching her husband sailing a generally harrowing experience! Tragically, Mrs Blair died in the same year that Deepdene was completed (1931), though she had managed to enjoy "a good part of the year" there.

In 1936, Ledyard was married again to Harriet, the widow of another prominent New Yorker, T. Suffern Tailer. Perhaps because Deepdene was built so much with his first wife in mind, Harriet didn't care for it, and after staying there only once or twice, they never stepped foot there again. It sat on the market for several years before being sold to Mrs Dorothy Hunter of Harrington Lodge who kept it as a guesthouse before moving in.

In 1958, the Hunters sold Deepdene to Godfrey Lowell Cabot (1861-1962), a Boston Brahmin who founded the Cabot Corporation, the fourth largest producer of carbon in the United States. Cabot is also remembered as a major benefactor of the Massachusetts Institute of Technology. He leased the property to Horizons Ltd., who ran it as the Deepdene Manor Hotel until 1978, though it had changed hands after his death in 1964. Today, "The Manor House" has been divided up into condominiums and the grounds filled with further apartments. Only the garden statues and boathouse remain unchanged.