Built in 1919, for Edward T. Stotesbury and his second wife, Eva Roberts. Designed by Addison Mizner, their summer home sat on an estate of 42-acres that stretched from the ocean to Lake Worth. The Stotesburys are best associated with their sprawling country home, Whitemarsh Hall, and Eva was the first mother-in-law of Doris Duke, "the richest girl in the world". When Stotesbury died in 1938, his $100 million fortune had dwindled to just $4 million, but Eva's astute ability to manage money allowed her retain all of their homes, though many of their staff had to be laid off....
zoom_in 1 images 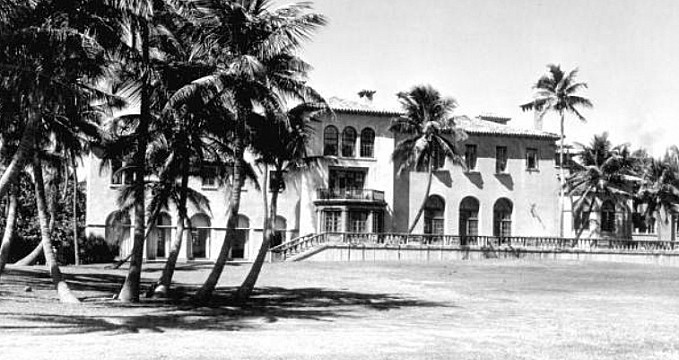 In the year after her death (1947), her heirs held an auction to sell off its furnishings but the house remained on the market until the late 1950s when it was bought by developers and demolished in 1959. The estate was subdivided and developed, now known as the El Mirasol Estates. Only the entrance gate and one of the fountains (both designed by Maurice Fatio) remain as a reminder of its former Gilded Age grandeur.

Bubble in the Sun: The Florida Boom of the 1920s and How It Brought on the Great Depression By Christopher Knowlton