Completed in 1921, for Edward Townsend Stotesbury (1849-1938) and his second wife, Eva Roberts (1865-1946). Whitemarsh Hall represented the apex of the Gilded Age and was arguably the finest example of grand Palladian architecture in the country. Said to be the most expensive house built in Pennsylvania, it contained 147-rooms and covered over 100,000 square feet of living space. Whitemarsh is the third Largest House ever built in the United States, behind Oheka Castle. After a visit here, car manufacturer Henry Ford reflected, "it’s a great experience to see how the rich live;" and, on taking in the view over the gardens the French Prime Minister, Georges Clemenceau, declared it to be America's answer to the Palace of Versailles. Its demolition in 1980 is considered to be one of the greatest losses sustained to American architectural history....
zoom_in 9 images 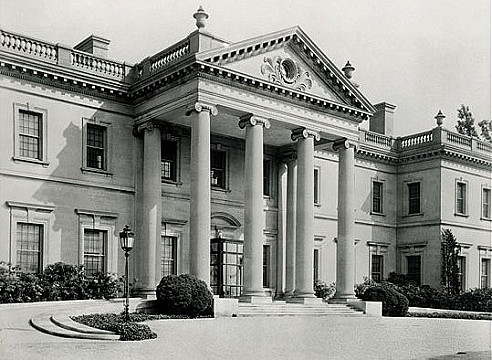 Ned Stotesbury was a banker and financier of uncommon ability. He was first the partner of Anthony Joseph Drexel and after his death, J.P. Morgan. The latter once commented that his number two knew, “more about the details of banking than any other man in the United States". Ned married his second wife, Eva, soon after the death of her first husband. Whitemarsh Hall was the first of three mansions that the couple would build together, the other two being El Mirasol in Florida and Wingwood House in Maine.

In 1911, Stotesbury first employed the architect Horace Trumbauer to double the size of his townhouse - the Stotesbury Mansion - off Rittenhouse Square in Philadelphia. In 1916, encouraged by his wife - and as part of her wedding present - Stotesbury purchased 300-acres in what was then rural Springfield, Pennsylvania. The new home, in which he and his wife intended to spend six months of the year (spring and fall), was only rivalled in splendor by Lynnewood Hall. Sited on top of a hill at the center of the estate and surrounded by magnificent gardens laid out by Jacques-Henri-Auguste Gréber (1882-1962), Trumbauer collaborated with Eva in designing their Georgian-esque Palladian pile.

Hindered by the War raging across Europe, Whitemarsh Hall (named for the neighbouring township) took five years to build at an estimated cost of some $10 million. From the outside, the 147-room U-shaped mansion of Indiana limestone concealed an inner court and gave the impression of standing over two stories when in fact there were six. Three of these were underground while the top floor of 39-rooms was hidden behind a high balustrade. The different floors were interconnected via five grand staircases and three elevators. It had its own telephone system manned by its own operators and everything was run off its own generator. A fleet of no less than 20 motorized lawn mowers were used to keep the lawns impeccably manicured.

Passing the gatehouse, it was approached by a two mile drive. The central block was 283-feet wide by 100-feet deep with an imposing portico in the Greek style supported by fifty foot limestone columns. Many of the principal reception rooms were over 25-feet in height: There were 45-bathrooms, 24-fireplaces, a 64-foot long ballroom (with a marble fireplace imported from Italy for $60,000), an indoor fountain, a movie theater, a gymnasium, a barber shop, a tailors, a refrigerating plant, a bakery, a cookie room (yes, solely for cookies!), a wine cellar that flouted Prohibition, a swimming pool styled as a Roman bath, squash courts, tennis courts and a games room with a billiards table and a slot machine.

To run the estate for one year cost $1 million and there were 70-groundsmen to maintain the gardens plus a further 70-domestic staff. Eva's son by her first marriage, James H.R. Cromwell (the first husband of Doris Duke), who kept a house on the estate, remarked that his mother, "ran her household with more efficiency than any factory I was ever in".

Even before Stotesbury met Eva, his collection of European 18th century portraits was counted among the top three in the country along with those more famously associated with Henry Clay Frick and Henry Edwards Huntington (1850-1927). His collection fitted in perfectly to the interior decor at Whitemarsh Hall, embellished by Sir Charles Allom. Antiques, predominantly sourced from England and France by Joseph Duveen filled the elegant, gilt and plaster-worked rooms with white and sea-green marble. Bathrooms had bronze dolphin faucets, five by ten foot gilt mirrors watched over the staircases, and marble statues and urns from Italy were found both within and around the grand mansion.

The pipe organ reached up three stories and could be heard throughout the mansion: Eva adored organ music and it was played continuously during the afternoons and evenings when they had guests. The Stotesburys frequently held parties for 600 or more people at once, floodlighting the house for these occasions. When they christened it with a ball in 1921, 800 people were in attendance including the future King Gustaf VI (1883-1973) of Sweden and Marshal Joseph Joffre (1852-1931), the French hero of World War One. That night four orchestras played in the house and gardens. On "Whitemarsh Hall" embossed stationary, every guest found a card in their room informing them of which chauffeur they had at their own disposal and what would be served for their breakfast.

The End of the Party

When the Great Depression hit in 1929, the Stotesburys closed Whitemarsh Hall for two years as they took off to Europe. On their return, they continued to spend money on the place, but it was only when Stotesbury died in 1938 that Eva realized their pockets had not been limitless. In 1912, Stotesbury was worth $100 million; at his death, he was worth just $4 million. Eva had to get rid of many of the servants who had been with her for over 20-years. She sold many of her husband's beloved portraits, much of Whitemarsh's exquisite furniture, and even some of the jewellery he'd given her which included a diamond pendant worth $500,000 in 1912. Despite all this, she got comparatively little in return.

In her husband's name, Eva made several donations from the house to the Philadelphia Museum of Art including the Clodions plasterwork in the rotundas; the stone Pajon of the Four Seasons; the plaster nymphs (possibly by Pajon and Lecomte); and, a magnificent marble statue that had belonged to King Frederick the Great (1712-1786) of Prussia. From 1938, she moved to Marly, a 13-acre estate near Washington D.C. (now the Belgian Embassy), leasing it for next-to-nothing from her old friend, Mrs Anna Dodge.

During World War Two, as the great house sat empty New York's Metropolitan Museum of Art made use of its cavernous halls and filled it with 15,000 priceless treasures of art for storage. In order to aid the war effort, Eva gave the two mile-long, eight-foot high steel fence to be turned into scrap metal for 18,000 guns.

Finally, in 1943 Eva sold the mansion and its 45.6 acres for a mere $160,000 to the Pennsylvania Salt Company. They converted the elegant rooms into laboratories and offices. The remaining 265-acres had been purchased by Matthew McCloskey (1893-1973) who built 1,000-homes for servicemen returning from the war, creating Whitemarsh Village. Penn Salt moved out in 1961, which was the last time the house was occupied.

In 1964, it was purchased by Willow Associates headed by Sydney Dvorak, when The Philadelphia Inquirer likened "the vast, very empty shell" of Whitemarsh Hall at the center of Whitemarsh Village to, "a Rolls-Royce limousine in the midst of a parking lot full of Crosleys". Unable to decide what to do with the house, it stood empty and fell prey to vandalism and water damage after the copper roof was ripped off by burglars.

In 1970, it was sold at auction for $700,000 to a syndicate headed by Kenneth Kaiserman and George Neff who wanted to build high-rise apartment buildings coupled with terraced units on the remaining acreage. But, planning permission was refused to the delight of the local community. In 1978, local developer Jay Gross purchased the decrepit mansion and demolished it two years later. In its place he built a series of townhouses that now stand on the once great home. The only haunting remnants that recall its gilded past today are the four 50-foot pillars that supported the front portico, the garden walls, one of the belvederes, and a few statues.

Philadelphia Mansions: Stories and Characters Behind the Walls By Thom Nickels