Beacon Street at the corner of Pleasant Street, Brookline, Massachusetts

Built in 1857, for Major Charles W. Wilder who sold it in 1865 to Brigadier-General James Scollay Whitney (1811-1878) and his wife, Laurinda Collins (1810-1908). Their eldest son, Henry Melville Whitney, lived with them until the General's death in 1878 and he moved into a house at the corner of Chestnut and Walnut. Just as his father had helped develop Boston's Back Bay and Fenway neighborhoods, Henry spotted an opportunity at Brookline and oversaw the widening of Beacon Street - buying up half the acreage that would be involved in the development as well as becoming the proprietor of the street railway line that is today the oldest continuously-running line in the country....
zoom_in 2 images 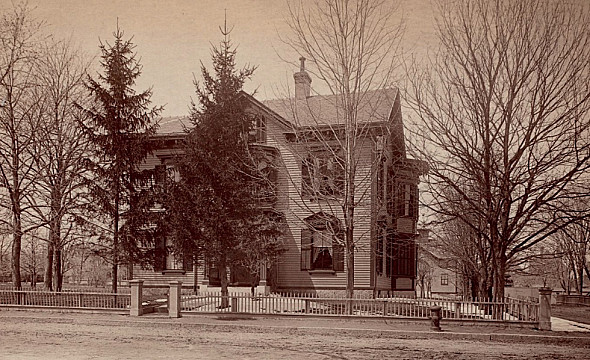 The house had been built on land that Wilder purchased from Charles Stearns (that he in turn had bought from the Sewall family) and was a stone's throw from Coolidge Corners. Henry's mother, Laurinda Collins, was still resident in the house when he widened Beacon Street in 1888. She died here in 1909 and her eldest daughter, Mary, continued to live here until 1912 when the house was torn down and replaced by a commercial block.