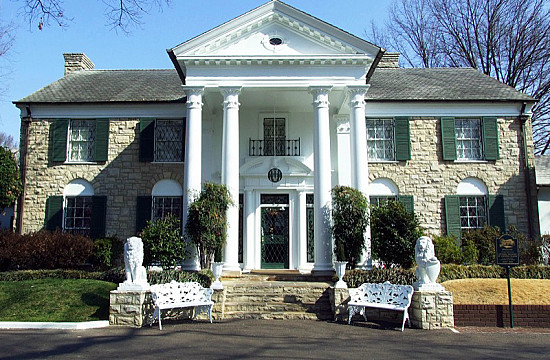 Grace Toof, for whom the iconic "Graceland" is named, died unmarried

Graceland was originally a 500-acre farm devoid of a proper house that was first deeded during the Civil War to Stephen Cummings Toof Jr. (1834-1910). A native of Montreal, Toof came to Memphis in 1852 and soon afterwards established his own commercial printing firm, S.C. Toof & Co., that among others rolled out the Memphis Daily Appeal. He left the farm to his second daughter, "Gracie" who used it for parties, family outings and picnics until her death in 1928. In her will, Grace subdivided the estate between the three children of her younger sister, Ruth, by Ruth's husband, Battle Manassas Brown.

It was the Brown's eldest daughter, Ruth Frazer Brown (1893-1974), who inherited the 158-acres of land on which she and her husband, Dr Moore, built Graceland Farms; so named in honor of Ruth's deceased spinster aunt, Grace. Educated in Massachusetts at Wellesley College and Smith College, Mrs Moore was a well-known Memphis socialite and her husband was the respected Professor of Urology at the University of Tennessee.

The 10,266 square foot mansion Ruth and her husband built on their cattle farm with several outbuildings was in the Colonial-Revival style, designed by the Memphis architects Furbringer & Ehrman. It stands over two stories and is constructed of tan limestone fronted by a white, two-story timber portico supported with four columns.

Somewhat serendipitously, Graceland was specifically designed with large rooms at the front to hold more than 500 people, for musical events: the Moores only daughter (yet another Ruth) had learnt to play both the harp and the piano by the age of four and was something of a musical prodigy. A graduate of the Curtis Institute of Music, she went on to have a successful career as a harpist with the Memphis Symphony Orchestra.

In 1952, the Moores divorced and five years later their daughter - by that time married to Charles Pittman Cobb - put the family home up for sale. In March 1957, just one year after the successful release of his debut album, a certain Elvis Presley asked his parents to start a search to find him a sizeable home with suitable privacy - primarily for his mother - and they brought him to see Graceland. At that time, it was then still very much in a rural setting, ten miles south of Memphis. He didn't need any persuading and by the end of the month, the house and its 13.8-acres was his for $102,500. By April he, his parents and beloved grandmother, Minnie, were all happily ensconced in their new home.

Elvis immediately set about renovating and extending his cherished new home that would soon cover 17,552 square feet, spending the best part of $500,000 on it in his first year there. The iron music gates at the entrance of the property were one of the first additions. The Moore's music room was converted into the living room as Elvis preferred to play on the sun porch with its double French doors opened on both sides of the house. The basement that had previously been a library was converted to accommodate the pool room (where he also recorded) and a TV room where he watched three televisions at once!

By the 1960s, the more iconic rooms and features had been added: "The Meditation Garden" and itss fountain where Elvis, his parents and grandmother are laid to rest; the 40 x 14 foot "Jungle Room" den where he also made recordings was complete with its own waterfall and leopard-skin furnishings; the "Trophy Room" displays some of his stage outfits, such as his wedding tuxedo, his Grammy Awards and the wedding dress of his wife, Priscilla. There is also a room with a scale model of the house where he was born in Tupelo, Mississippi; a stable of horses; and, his racquetball court. His private jets, famous pink Cadillac and other cars are kept across the street from the main house.

In the years after Elvis's death, taxes and debts on Graceland grew to $500,000 and the family came close to selling. But, taking note of how other historic houses were run, Priscilla Presley made a shrewd move by employing Jack Soden to turn Graceland's fortunes around. In 1982, the mansion opened its doors to the public and the Presleys haven't looked back since. As the only child and sole heir to her father's estate, Lisa Marie Presley is the present owner of Graceland and President of Elvis Presley Enterprises.

Today, Graceland is one of the most iconic houses in the world, attracting 600,000 visitors a year. In 1991, it became the first site related to Rock n'Roll added to the National Register of Historic Places; and, in 2006, was designated a National Historic Landmark.

Last Train to Memphis: The Rise of Elvis Presley By Peter Guralnick

A Guide to Historic Downtown Memphis By William Patton