Built circa 1813, for Hardman Philips (1785-1854) who named it Moshannon Hall before it became known as "Halehurst". Hardman Philips was the youngest brother of Henry Philips who had come to America to extend the reach of their family's cotton manufacturing business and to that purpose purchased 200,000-acres in Pennsylvania, Maryland, and Kentucky. Having founded Philipsburg in 1796, Henry died just four years later. Hardman came out to America in 1810 ostensibly to oversee the growth of Philipsburg, but also to escape England where he was wanted for a trumped charge of attempted murder. Helped by his sister-in-law, the former Sophia Chew, Hardman "spearheaded an impressive commercial and industrial boom" and "supporting the town through thick and thin" he saw Philipsburg grow into a thriving town....
zoom_in 1 images 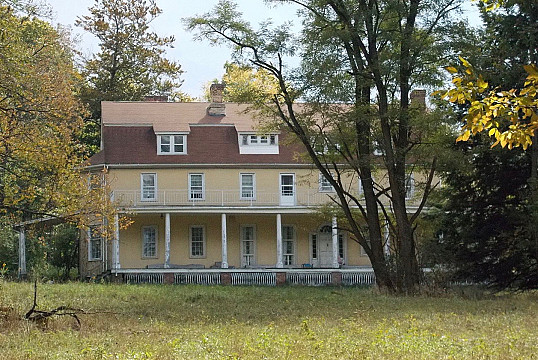 Having lived here on-and-off for thirty years, three years after the death of his beloved sister-in-law (1844) Hardman sold all his American property and returned to Britain, living out his final years at the Manor of Gwernvale in his wife's native Breconshire.

The house Hardman named Moshannon Hall was built by him as a 2.5-story Georgian house of five bays with a gable roof. Having sold Philipsburg to Ulmann & Stanley of New York, they sold it on just two years later to Morgan, Hale & Co., also of New York.

General Reuben Charles Hale (1812-1863) was one of the senior partners in the firm that now owned Philipsburg and he moved here with his family from about 1850. He renamed Moshannon Hall "Halehurst" and transformed it into a 3.5-story house of seven bays with a gambrel roof, 11-bedrooms and 13-fireplaces. He lived here with his wife, Sarah, and their several children. He helped build the Tyrone & Clearfield Railroad and during the Civil War served as Quartermaster of Pennsylvania. He died in 1863 and his widow remained here until her death in 1884. "Halehurst" then passed to their daughter Laura and her husband John Addams Mull who were the parents of Reuben H. Mull (1876-1953). Today, the house is the private home of Anthony P. Mull, grandson of Reuben H. Mull.

A Refuge Assured By Jocelyn Green