Built in 1856, by Ulysses S. Grant (1822-1885) and his wife Julia Boggs Dent (1826-1902). Standing on what was once known as the 'White Haven Farm' - Mrs Grant's childhood home - having planted various crops on the 80-acres gifted to the young couple by Mrs Grant's father, the future U.S. President then built much of the house with his own hands, helped by his slaves. In the dictionary "Hardscrabble" is defined as something involving hard work and struggle, particularly in reference to a tenant farmer's lot in life. As Julia recalled, the house was, “so crude and homely I did not like it at all, but I did not say so. I got out all my pretty covers, baskets, books, etc., and tried to make it look home-like and comfortable, but this was hard to do. The little house looked so unattractive that we facetiously decided to call it 'Hardscrabble.'"....
zoom_in 1 images 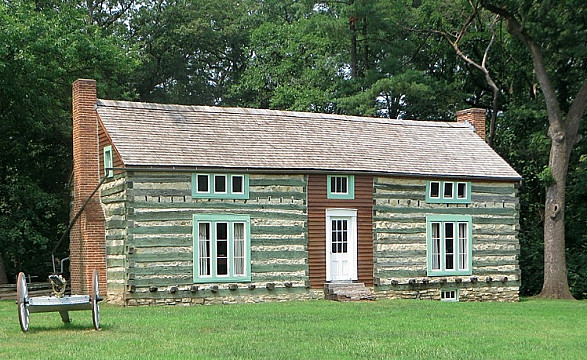 The Grants only lived here for about three months and thereafter rarely returned as Ulysses pursued his famous military, political career before living out his later years in Illinois and New York. In 1884, having got himself into a dire financial situation, Grant mortgaged White Haven (along with his Civil War memorabilia) to Billy Vanderbilt and to add to his misfortune he was diagnosed with cancer in the same year. Vanderbilt offered to cancel the debt, but the Grant family felt obliged to honor it. Grant died the following year and Vanderbilt sold White Haven to Luther Conn, a former Captain in the Confederate army. In 1903, Conn sold off its southernmost 273-acres to August A. Busch of the famous Anheuser-Busch (A-B) Brewery who then built Grant's Farm Manor.

Due to its historical connection to Ulysses S. Grant, Hardscrabble was never demolished, but it has been dismantled and moved three times. In 1907, it was placed in its now permanent location on the Grant's Farm Manor estate, still owned and operated by the Anheuser-Busch Brewery and adjacent to the Ulysses S. Grant National Historic Site.