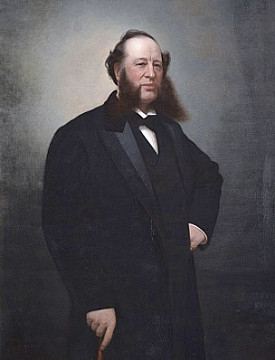 He was born in New Brunswick, New Jersey. As the eldest son of one of the most famous tycoons of the Gilded Age, "Billy" was put to work by the age of sixteen as a bank clerk. Constantly berated by his father, he had a nervous breakdown at the age of nineteen. He was packed off to Staten Island and deemed good for nothing else other than managing the small farm on which his father grew up and kept merely for sentimental reasons. The following year Billy got married to a parson's daughter which only cemented his father's opinion that he was unambitious and would never amount to anything. Then, over the course of the next decade, Billy quietly went about silencing all those who had ever doubted him: he made the farm into a profitable venture and was the driving force behind the turnaround of the once struggling Staten Island Railroad.

By the time the Vanderbilt family returned from their 1853 tour of Europe aboard their father's 270-foot yacht, "the Commodore" had a new found respect for his eldest son. Billy now became his father's righthand man, notably in the railroad industry on which they focused entirely from 1864. His father died in 1877 and left Billy as sole heir to his business empire and $95 million of his overall $105 million fortune. Billy immediately set about expanding their railroad interests and by the time he died just eight years later, the Vanderbilt business owned 10-railroads, a sleeping car company, and the Hudson River Bridge. During that brief time, Billy doubled the family fortune, leaving $200 million - $50 million more than Willy Astor and double Jack Astor's fortune

After his marriage, Billy lived in the Vanderbilt Homestead on Staten Island. It wasn't until after his father's death that he built the pair of houses that he is remembered for today on New York's Fifth Avenue, known as the Vanderbilt Triple Palace.

He and his wife had four sons and four daughters. He left $10 million to each of them except his two eldest sons who between them divided the remainder of his estate which gave them both roughly $70 million each. His children used a significant proportion of this money to build some of the most iconic mansions of America's Gilded Age, including: Biltmore, the largest house in the United States; the Vanderbilt Chateau, the largest house in New York City; and, The Breakers, Newport's most sumptuous 'cottage'. His eight children were: (1) Cornelius Vanderbilt II (2) Margaret, Mrs Elliott Fitch Shepard (3) William Kissam Vanderbilt (4) Emily, Mrs William Douglas Sloane and afterwards Mrs Henry White (5) Florence, Mrs Hamilton McKown Twombly (6) Frederick William Vanderbilt (7) Eliza, Mrs William Seward Webb (8) George Washington Vanderbilt