Built in 1871, for E. Kirke Hart (1841-1893) of Albion, New York, and his wife, Louise Sanderson (1840-1913). The house was built on what is now Heart Island in the Thousand Islands, but when that island was acquired by George Boldt (1851-1918) he had the house dragged across the ice to its current position on Wellesley Island so that he could build Boldt Castle in its place. Having been home to the Hart House Inn under various owners since 1994, it is currently closed and its future is unclear....
zoom_in 1 images 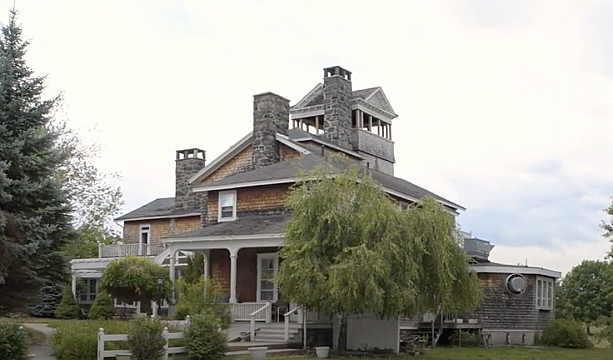 The sizeable cottage was 84-foot long by 74-foot wide, offering 12,432-square feet of living space. The Harts summered here up until his death in 1893. That year, his widow sold the island to the multi-millionaire hotelier George Boldt (1851-1918) and he lived here for a period while works began on the various outbuildings he was putting up on the island.

In 1899, George chose to build Boldt Castle in its place so, that winter, he moved the house to Wellesley Island, which he also owned and where he had already put up several houses for his intended guests to Heart Island. Though altered over the years, it has remained here ever since, now occupying 2.29-acres with fine views of the St. Lawrence.

In the early 1900s, the house was expanded to 50-rooms and became the clubhouse of the "Thousand Islands Club". During the tail end of the Gilded Age it was among one of the most exclusive clubs in New York - just to join cost $100,000 and the annual fee thereafter was $10,000. In 1944, the club was acquired by the Canadian Steamship Line (CSL) and the clubhouse was given a new home across the street. The old Hart house was then renamed and repurposed as the "Golf Course House".

Having gradually fallen into an ever worsening state of repair, it was purchased in 1994 by the Rev. Dudley Danielson and his wife, Kathy - the granddaughter of a Hungarian innkeeper. Together, they resurrected the old building and transformed it into the Hart House Inn, retaining several original features including the fireplace in the entrance hall.

In 2005, Hart House Inn was purchased for $1.2 million by Arthur D. Mook and his wife, Jennifer Jo Morgan. They ran it as a bed-and-breakfast with eight guest suites and continued the upmarket restaurant. But, unfortunately the bank foreclosed on them in 2009. Two years later, it was bought for $450,000 by Olga Stein of Toronto, former editor of "Books in Canada". Having had it refurbished, it opened its doors once again as the Hart Island Inn but has since closed and its future is now unclear.

Summer Houses by the Sea: The Shingle Style By Bret Morgan

Upstate New York Off the Beaten Path®: A Guide To Unique Places By Susan Finch