Built in 1900, by George Charles Boldt (1851-1918) for his wife, Louise Augusta Kehrer (1862-1904). At 43,793 square feet, the castle is recognized as one of the Largest Historic Houses in the United States. Standing on its own spectacular island estate in Alexandria Bay, Boldt Castle was built as a "monument to love" - a Valentine's Day present from George to his beloved wife - but it was left unfinished when Louise tragically died months before its completion and George Boldt never stepped foot on the island again. Since completed and operated today by the Thousand Islands Bridge Authority, the castle is a major tourist attraction and a popular wedding venue....
zoom_in 20 images 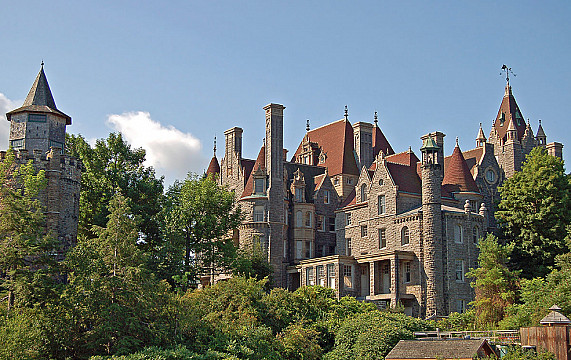 George Boldt was born in Prussia and started life as a kitchen boy. He became General Manager of the Waldorf-Astoria New York and then built and opened the The Bellevue-Stratford Hotel in Philadelphia. Having become as wealthy as the clientele he catered to, Boldt took his family up to the Thousand Islands for their summer vacation in 1895.

So taken were the Boldts by the area, Mrs Boldt purchased the 5-acre "Hart Island" that July for just $1 from Edward Wallace Dewey (1835-1903). Only eleven days earlier, Dewey had purchased the island for $10,000 from the estate of former Congressman E. Kirke Hart (1841-1893), for whom the island was named. Boldt went on to accumulate 3,000 acres in the region, and on Wellesley Island he built several cottages that he rented to his friends as well as an airfield, 18-hole golf course, polo field, stables and tennis courts.

Boldt's first step towards creating his wife's dream home was to have the island reshaped to resemble a heart before renaming it "Heart Island". The Boldts spent the next five years in the existing summer house while peripheral structures were built such as the castellated power house - with it's clock tower whose chimes can be heard four miles away - to provide electricity to the island; the dove-cote tower for their collection of exotic birds; the triumphal arch of the peristyle at the entrance to the island; and, the Alster Tower. By 1899, Boldt was ready to build a castle dedicated to his wife ("my beautiful princess") modelled on the medieval Castle Eltz in their native Germany.

The Castle for "My Beautiful Princess"

In the winter of 1899, Boldt commissioned the Hewitt Brothers of Philadelphia to undertake the design and construction of his castle that would stand as a testament of his love for his wife. Work began by transporting Kirke Hart's original 30-room summer house across the ice, where it was re-erected on Wellesley Island as the home of the Thousand Islands Country Club, and since then it has become the Hart House Inn.

In 1900, a small army of three hundred workmen were set to work on the Boldt's 120-room castle. The rose granite with which it and Singer Castle were built was quarried from nearby Oak Island, also owned by Boldt. Costing $2.5 million, the castle stands four stories high over a two-story basement, comprising 43,793 square feet of living space - not 60,000 which is the figure usually bandied around that perhaps includes outbuildings.

The grounds contain Italian gardens with fountain pools, a swan pond, gazebo, terraces and marble statues imported from Europe. There are also several statues of stags, most notably seen on the Peristyle, that were known as "harts" and these also feature in Boldt's coat-of-arms, denoting his German ancestry. The monumental arch and drawbridge was originally conceived to be the waterfront entrance to the property and near to it is an entrance to an underground tunnel that runs directly into the castle's basements for transferring goods and supplies.

The castle's rooms were furnished with paintings, sculptures, mosaics and tapestries from Europe; and, included - among over an hundred others - a ballroom, sauna, indoor swimming pool and bowling alley. Throughout the castle, heart symbols can be found carved or moulded into the fabric of the building. The vast, domed stained glass skylight above the castle's great hall was shattered when the castle lay empty but has recently been recreated by the Brennan Stained Glass Studio.

The 90-foot high Alster Tower - primarily built as a playhouse for the Boldt children - was first opened in the summer of 1899 and to celebrate Boldt held a party there for the New York Bankers Association. Designed to resemble a 16th century fort on the Alster River in Germany, according to some sources the Boldts lived here while the castle was being built, while other sources suggest they took a house on Wellesley Island. One way or the other, it certainly was habitable with bedrooms, billiards room, bowling alley, kitchen, library and the Shell Room that was used for dancing - today, it also contains a café. Of the several outbuildings, perhaps the most impressive was the boathouse, located across the water facing the estate on Wellesley Island. Boldt owned over 60-boats and this structure was designed to accommodate yachts up to 128-feet in length.

From Tragedy to Tourism

All this magnificence came to nothing just months before the castle was due to be completed. Boldt had intended to unveil the castle on Valentine's Day of 1904, but that January tragedy befell him when his wife died and he sent a telegram calling for all construction to be halted immediately. Boldt lived on for a further twelve years and though he continued to summer on Wellesley Island, he never set foot again on Heart Island. In 1918, his children - whose descendants continued to summer in the area at Hopewell Hall - sold the island estate with the all-but-complete castle to Edward John Noble (1882-1958), co-founder of the American Broadcasting Corporation (ABC) who opened it as a tourist attraction.

Over the course of the proceeding decades, the castle gradually deteriorated at the hands of both the elements and vandals. In 1939, a spark from a firework display burned out the roof of the power house and just three years later, the castle was stripped of its iron to help the war effort. In 1977, the E.J. Noble Foundation sold Heart Island to the Thousand Islands Bridge Authority for $1, and that year a major restoration project was undertaken - $15 million has been spent since then bringing the castle back to life.

When its doors were again opened to the public in 1978, 99,000 visitors came to see it that year and today that number has risen to about 160,000. Work continues to be done to complete the castle, but the grounds are now fully restored and with tours held from May to October, Heart Island has become a favorite wedding venue and one of the region's most popular attractions.

Boldt Castle: In Search of the Lost Story By Paul Malo

Saints, Sinners and Sailors of the Gilded Age: A compendium of biographical sketches centered on the Gilded Age in the Thousand Islands By Rex Ennis

The Thousand Islands By The Antique Boat Museum