Completed in 1892, for Colonel Frank Joseph Hecker (1846-1927) and his wife Anna Marie Williamson (1844-1933). It was designed by the noted Detroit architect Louis Kamper (1861-1953) and took four years to build. The 26,000-square foot mansion has 49-rooms and was influenced by the Château de Chenonceau in France's Loire Valley, as was Seaview Terrace in Newport. It remained in the Hecker family until 1947 when it was purchased by Paul Smiley and used for musical instruction. Sometimes also referred to as the Hecker-Smiley Mansion, today, it is home to the Alumni Relations Department of Wayne State University, formally known as the Tierney Alumni House....
zoom_in 20 images 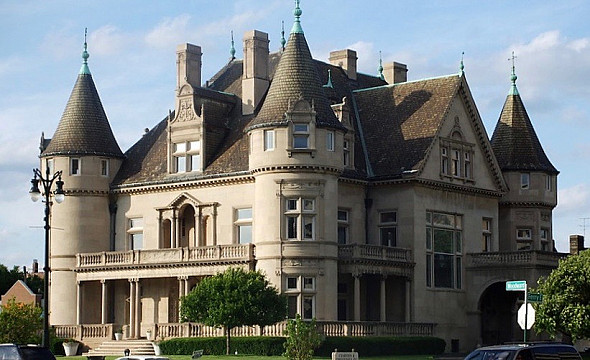 Frank Hecker made his fortune in the railroad supply business after the Civil War. His 49-room mansion contains an oval dining room panelled in mahogany; a Rococo music room of white and gold; and, a ballroom and hall both panelled in English oak. The fireplaces in the vestibule rooms are made of Sienna marble from Italy while others are constructed of Egyptian Nubian marble and onyx. It is said that the ceiling in the south-east tower was painted by the artist James Abbott McNeill Whistler (1834-1903).

The Heckers were generous hosts and they later converted their carriage house into a concert hall for 200 people. After Mrs Hecker died in 1933, their children maintained it as a boarding house for college students. In 1947, they sold it to Paul Smiley of the Smiley Brothers Music Company who used it for musical instruction etc. During this time, both the Detroit Chamber Music Workshop and the Women's Symphony started here.

The year after Smiley died in 1990, the building was sold to the legal firm of Charfoos & Christensen for use as their offices. The firm rehabilitated the mansion and remained there until 2014. That year, Wayne State University purchased it for $2.3 million. The university has its Alumni Relations Department staff here and have named it "Tierney Alumni House" in honor of 1960 Wayne State graduate and donor, Thomas Tierney.

Guardians of Detroit: Architectural Sculpture in the Motor City By Jeff Morrison