Completed in 1929, for Edson Bradley Jr. (1852-1935) and his wife Julia Wentworth Williams (1852-1929). The châteauesque Seaview Terrace contains 54-rooms and covers 39,648-square feet of living space, making it today the largest privately-owned mansion put up during the Gilded Age at Newport. It is the 4th largest of the Newport Cottages, behind only The Breakers, Ochre Court and Belcourt. Having started life as a whiskey palace (Bradley made his substantial fortune through Bourbon whiskey) with an interior that was, "sumptuous beyond belief," its fortunes waned. By 1950 it had become "Burnham-by-the-Sea," a girls boarding school run by Mrs Emerson whose late husband was a distant cousin of the celebrated Ralph Waldo Emerson. Between 1966 and 1971, it gained cult notoriety as the fictional "Collinwood Mansion" in ABC's hugely successful 'vampire soap-opera,' Dark Shadows. Others of course may remember it as the location for the 1975 pornographic film The Story of Joanna. Since 1974, it has been owned by the Carey-Bettencourt family and is also referred to as the "Carey Mansion"....
zoom_in 20 images 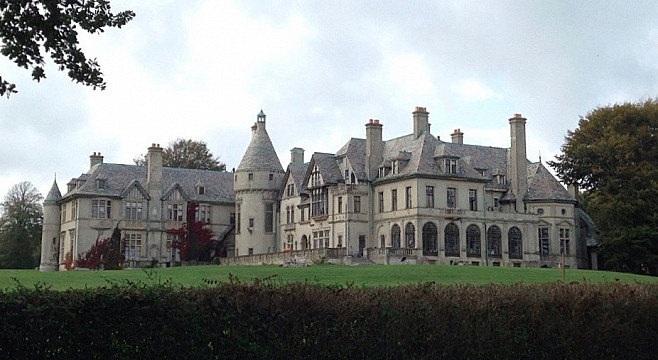 Edson Bradley grew up in Connecticut and was educated at Phillips Academy, Andover, in Massachusetts before studying at the universities of Munich and Heidelberg in Germany. He came to New York in 1880 and through his marriage to the stepdaughter of Marshall Allen, seven years later he found himself as the sole distributor of "Old Crow" Bourbon and President of W.A. Gaines & Co. that under him became the largest producer of sour mash whiskey in the world. As the leading spokesman for the U.S. liquor industry he went to Washington D.C. to stave off Prohibition, building a mansion that the press dubbed Aladdin's Palace. Having lost the battle against Prohibition and after his summer home in the Thousand Islands burned down, he turned his eyes to Newport with the thought of a gift for his beloved wife to celebrate their 50th wedding anniversary.

"...For the Wife who had been the Perfect Helpmate"

The Bradleys were friends with the Pulitzer Prize-winning author Maud Howe Elliott who published her memories of America's most fabled resort, This Was My Newport . In reference to Bradley and the beginnings of Seaview Terrace she wrote: "No trouble, no expense was too great to make a home for the wife who had been the perfect helpmate".

In 1922, Bradley purchased Seaview from the children of James Powell Kernochan (1831-1897). By the following year he had instructed Howard Greenley - the same architect he had used in Washington D.C. for Aladdin's Palace - to incorporate the existing mansion (that would form the east wing) into a much larger new one inspired by the 16th century Château de Chenonceau. The chateau created by Greenley is built of limestone and except for its trim is covered in chalk-white stucco in the Norman style, giving it a rare aged appearance. The Bradleys named their new home "Seaview Terrace" and building costs ran to a reputed $2 million including the 14-acres of landscaped gardens viewed from wide balustraded terraces on varying levels. In 1925, the chateau contained 17-rooms on the first floor, 25 on the second, and 12 on the third, covering in all 39,648-square feet.

The Bradleys were already well-known for hosting lavish parties, so even though Greeneley was still working on the house in 1925, that didn't stop them from laying on a suitably flamboyant affair to celebrate their 50th wedding anniversary - which also coupled as an early housewarming. Once the empty bottles and confetti had been swept up, Greenley began the monumental task of dismantling period rooms from France and Aladdin's Palace (again!) to have them transported and refitted here. According to legend, this was one of the largest house relocations recorded in America. For his efforts, the American League of Architects awarded Greenley the President's Medal in 1928.

The high-pitched roofline of their sprawling French Renaissance chateau took some architectural features from another of the famed Loire chateaux, Château de Chambord, but in fact it is more English in design, marked by gables and a profusion of chimneys. The conical tower was transported from Aladdin's Palace and rebuilt here, marking the divide between the old house and the new. Inside, the roof is divided into three separate attics that all lead onto one another, and are bizarrely punctuated with spy holes to look into the rooms below - supposedly so that the servants could reprimand overly-amorous house guests, or thieves! In a similar mysterious manner, the pipe organ is found in a hidden room next to the chapel, accessed only by a trap door on the second floor.
The Whispering Gallery & 16th Century Stained Glass Windows

Included among the many rooms shipped down from Washington was the living room-cum-private theater, the Spanish-Gothic Oratory that sat 150, and the original ballroom. New rooms and features laid out by Greenley included the "Whispering Gallery" reminiscent of that found at St. Paul's Cathedral in London, where a person standing at one end of the cloisters can hear the slightest whisper made at the other end.

The stained-glass windows on display were all made in 16th Century Europe: They came from Holland; the Carmelite Church at Boppard in Germany; and, one named The Flagellation from the early-Renaissance period was originally designed for Milan Cathedral in Italy. This last piece is thought to have been made by the great Corrado Mochis (1525-1569) of Colonia and was part of a series portraying the Passion of Christ.

Other period rooms throughout the house featured English wood panelling and Italian plaster ceilings. Both the Bradleys were passionate collectors of antiques and their sizeable collection included European art and objets d'art dating from the Middle Ages as well as contemporary American pieces. The house was filled with statues, Chippendale chairs, paintings, Chinese porcelain, Gobelin tapestries, and one particular tapestry woven by the Greniers in the late 1400s depicting a scene from "The Great History of Troy". Aside from the reception rooms, its vaulted flag-stoned halls followed a distinctly medieval theme with bearskin rugs, hunting trophies, great chests from the Renaissance period, wrought-iron torch holders, elaborate hanging lamps, Medieval Italian lanterns, Persian tiles, and an array of arms and armor that would have made William Randolph Hearst envious.

Bradley had collected so many antiques that he was unable to fit them all into Seaview Terrace and sold part of his collection to fund other parts of the house at an auction in New York in 1927. The mansion was finally completed in 1929, but - with echoes of Boldt Castle - any excitement this elicited was short-lived when he lost his wife for whom it was built in the same year. To add to his misfortune, his finances that had already taken a hit from Prohibition were now also severely affected by the Wall Street Crash.

In January, 1930, Bradley transferred ownership of Seaview to his only daughter, Julie (1880-1948), but their run of bad luck was not over and just two months later, her husband (the Rt. Rev. Herbert Shipman, Episcopal Bishop of New York) "died suddenly". Bradley then bought a 20-room apartment for their broken hearts in New York though they still continued to come to Seaview together in the summer. Bradley died in London in 1935 and Julie summered here up until 1941 after hosting a ball for 800-people that August to raise money for the British war effort. In 1943, she married Naval Captain John Charles Fremont III but she died just five years later - the last of the Bradley line.

In 1941, Seaview had a tax valuation of $145,800 which was quite a tumble from its $2 million build cost just 16-years earlier. That November, Julie sold the 14-acre estate off in parcels for a total of $31,700. The gardener's cottage, garage, and open lot was sold as a whole for $6,700 to Mathew Ryan of Newport; and, the mansion itself and its remaining furnishings were knocked down to just $25,000 and sold to J. Henry Reuter, of Providence who was representing "an undisclosed person". Reuter had been Robert Livingston Beeckman's campaign manager in 1922 when he failed to return to the U.S. Senate.

Julie Shipman stayed in New York while the auction took place. Having five days to accept or reject the offer, to the surprise of all, she turned it down after having discovered the identity of the purchaser who was reputed to be a well-known gambler. But, just seven months later in June, 1942, Julie neglected to pay her property tax bill of $9,945 and Seaview was seized by the tax department and put up for auction, again. Newport being an important naval base during the war, Seaview was acquired for use as an officer's mess, but it continued to fall into disrepair and very quickly became a burden to the city.

In 1949, Seaview was sold for a mere $8,000 to Edward J. Dunn who had also recently acquired Belcourt Castle. That same year, for a small profit he transferred title of the estate to Mrs Susan (Hood) Emerson, the widow of George Waldo Emerson, Sr. and the headmistress of what is today the Stoneleigh-Burnham School in Massachusetts. George's father was the namesake and cousin of the founder of Emerson College in Boston and a distant cousin of the celebrated American philosopher Ralph Waldo Emerson.

In 1950, Seaview became Burnham's sister summer boarding school and was renamed "Burnham-by-the-Sea," while during the winter it was run as the Newport School for Girls. From 1966 to 1971, it became a familiar sight on TV sets across America when it was chosen to portray the fictional "Collinwood Mansion" in ABC's hugely successful "vampire soap-opera" Dark Shadows. Despite its new found fame, the mansion was still expensive to retain and by the early 1970s the Emerson family had placed it back on the market.

The Carey Mansion... and Joanna

In 1974, Seaview was purchased for $270,000 by Martin T. Carey (1922-2020) and his wife, Millicent. Mr Carey was the brother of Hugh, late Governor of New York. The Careys had intended to convert Seaview into a business seminar and conference center, but it did not materialize. In 1975, Newport society was shocked to the core when it was reported that the Careys had then allowed the chateau to be used for a pornographic movie, The Story of Joanna - a 70s equivalent of Fifty Shades of Grey. The Careys claimed not to have known that it was an adult movie and asked the production team to leave. The film went ahead anyway... completed at the Carey's other historic mansion, Winfield Hall!

The Careys began renovating Seaview and commissioned Donald Tinney - past owner of Belcourt Castle - to restore the stained glass windows in the Solarium, Chapel, and Great Hall. But still looking to make money from the house, they soon after managed to secure a lease with Salve Regina University who took on the mansion, stables, and 16-room gate lodge, renaming the main house "Carey Mansion". From 1977 through to the 1980s, the mansion was used annually to accommodate the American team for The Americas Cup.

In 2009, the university terminated its lease with the Careys and today Seaview Terrace and its 7-acres is once again a private residence, occupied by their daughter, Mrs Denise Anne (Carey) Bettencourt. In 2013, it featured in the reality mini-series for paranormal enthusiasts, Stranded, which aired on Syfy. Today, it plays host to the Newport Tennis and Fitness Club, but as a private home, it remains strictly off-limits to the public.

In the Shadows of a Newport Mansion By Michael Seggie

Chateau of Secrets: A Novel By Melanie Dobson

Arms and Armor: Highlights from the Philadelphia Museum of Art (2020) By Dirk H. Breiding

The Winters: A Novel By Lisa Gabriele