Dating from 1270, its most famous early occupants were the Boleyn family. It was converted into a manor by Geoffrey Boleyn in 1462 when he added a Tudor dwelling within its ancient walls. Geoffrey's famous great-granddaughter, Anne Boleyn (1501-1536), was born at Blickling Hall but she grew up here with the rest of her family before her ill-fated marriage to King Henry VIII who stayed here while courting her. After the death of Anne's father, Thomas Boleyn, the castle was taken into the possession of the King. He bestowed it upon his fourth wife, Anne of Cleves, before it passed through several different families: Waldegrave (1557 to 1715); Humfreys (1715 to 1749); and, Meade Waldo (1749 to 1903). During the 1800s it ran into an ever worsening state of disrepair while it was leased to various private tenants. In 1903, it received the attention it so desperately needed when it was purchased by the former New Yorker, William Waldorf Astor (1848-1919), who had become an English citizen in 1899....
zoom_in 20 images 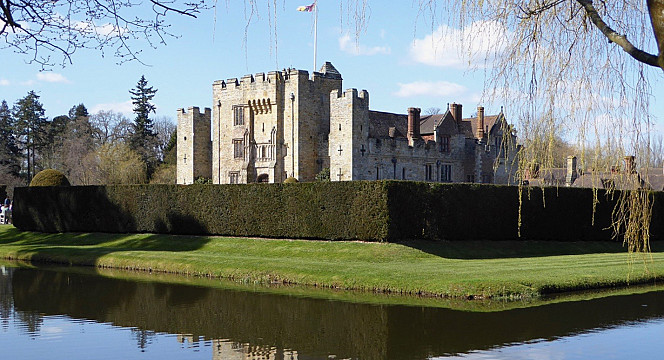 Over the next five years, Astor renovated the castle in its entirety as well as building a Tudor-Revival 'village' next to the castle to house up to 100-guests. Having served as U.S. Ambassador to Italy in the 1880s he had developed a passion for Italian art and sculpture and he landscaped the gardens at Hever to accommodate his collection of classical statues.

He divided his time between here, his mansion at 18 Carlton House Terrace in London, and the Villa Astor on Italy's Amalfi Coast. Having given Cliveden as a wedding present to his eldest son, on his death he left Hever to his second son, John Jacob Astor (1887-1971). John was an Olympian, a Member of Parliament and the owner and Chairman of The Times newspaper who was created the 1st Baron Astor of Hever Castle in 1956.

In 1962, John placed the castle in trust for his son, Gavin (who succeeded him as Chairman of The Times) and retired to France where he died in 1971. Gavin opened the castle and its grounds to the public from 1963, but twenty years later (1983) opted to sell the 3,000-acre estate to Broadland Properties Ltd, owned and operated by John Guthrie.

Just as Willy Astor provided a much-needed fresh direction to the castle back in 1903, so too has Broadlands Properties to take Hever into the 21st century. From an historical perspective, the visitor experience has been greatly improved and the celebrated British Tudor Historian David Starkey stated that Hever Castle, "now has one of the best collections of Tudor portraits after the National Portrait Gallery". Environmentally, its carbon foot print has been massively reduced through the installation of a 90% self-sufficient biomass woodchip boiler; and, ecologically, its antique sewerage system has been transformed into a series of habitats and lagoons to support a diverse range wildlife.

Anne Boleyn, A King's Obsession: A Novel By Alison Weir

In the Footsteps of Anne Boleyn By Sarah Morris & Natalie Grueninger