Built circa 1890, for William Charles Browning (1833-1904) and his wife, Adelaide Scott (1842-1913). Located on "Millionaire's Row" in the Thousand Islands, Hopewell Hall was associated with the Boldt family - builders of the iconic Boldt Castle - up until at least the 1980s and remains a private summer residence today....
zoom_in 1 images 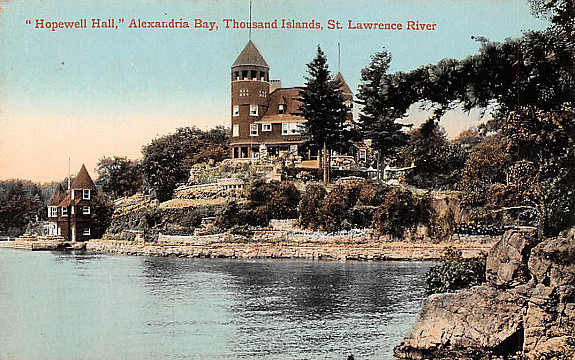 In the late 19th century, the firm established by William Browning and his brothers (Browning, King & Co.) was the largest wholesale manufacturers of clothing in the world. The Brownings kept a townhouse in Manhattan and in 1893 their summer home was described by The New York Times as, "one of the finest of the St. Lawrence cottages". It stood on a 400-acre estate on Wellesley Island with what was described as a, "highly developed landscaped water frontage," with a boathouse and at least two smaller, separate cottages. In 1912, the by then widowed Mrs Browning sold the estate to George Boldt (1851-1918) who had famously built Boldt Castle across the water on Heart Island.

Perhaps by way of a consolation gift, Boldt gave Hopewell Hall to his daughter, Louise, who had recently been granted a divorce from her husband of only three years, Captain Alfred Graham Miles (1875-1947). Louise summered at Hopewell every year until her death, when it was inherited by her only daughter, Clover Wotherspoon Miles (1910-1993).

Clover married Alexander David Gordon Baird (1891-1988) and they divided their time between Hopewell Hall and their other houses in Toronto and Delray Beach, Florida. According to the Watertown Daily Times, in 1949 Clover was struck by polio and took up writing poetry again after having studied the subject at Columbia University. She and her husband built a separate cottage on the estate where they could each quietly pursue their hobbies away from the main house that had become full with their son and his children.

It is unknown who the present owners are today, but as of 2014 it is known that they have meticulously restored Hopewell. They have also commissioned Taylored Architecture to draw up plans with a mind to recreating the estate's original ferry pavilion, its walled promenade and stone steps. It is understood to be currently up for sale.

Saints, Sinners and Sailors of the Gilded Age: A Compendium of Biographical Sketches centered on the Gilded Age in the Thousand Islands By Rex Ennis