Built 1752, for the 2nd Duke of Broglie to the design of Pierre Mouret on the site of an older residence. It was remodelled (and perhaps even entirely rebuilt) in 1782 and underwent another major transformation in 1856. Situated next to the Rodin Museum, it is the largest private property in Paris, owned today by the King of Morocco. In about 1900, it became the French home of the American couple Ogden Mills and his wife, Ruth. From 1917 to 1920 they gave it for use as the Headquarters of the U.S. Army in France and their daughter, the Countess of Granard, renovated it in 1970....
zoom_in 3 images 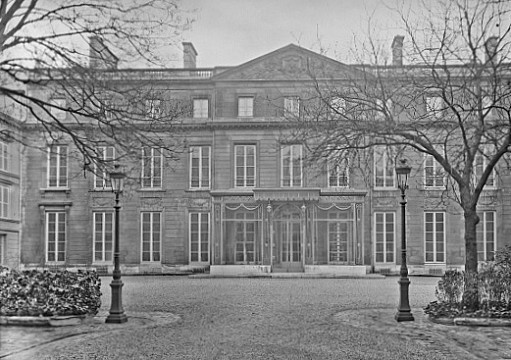 In 1782, it was remodelled/rebuilt for the Marshal de Broglie by the architect Jean-Baptiste Louis Élisabeth Le Boursier. It was acquired by the Marquis de Semonville who rented it from 1815 to the Duke of Plaisance whose eldest daughter-in-law was the Philadelphia-born, Sophie de Barbe-Marbois. In 1826, it was bought by the widowed Duchess of Montebello (1782-1856). After her death, it again underwent a grand transformation for the new owners, the Comte d'Haussonville, and his wife the essayist Louise de Broglie (1818-1882), to the designs of Gabriel-Hippolyte Destailleur.

In 1914, it became one of the five residences of the American couple Ogden Mills and his wife, Ruth. From 1917 to 1920, they leant it to the U.S. government as the Headquarters of the US Army. It passed to their daughter, Beatrice, Countess of Granard, when it became known as the "Hotel de Lord Granard" for her Irish husband. Using Jacques Robine, Beatrice restored the old house in 1970, and died two years later. Today, it is one of the residences of King Mohammad VI of Morocco. Sitting in its own courtyard, its splendor is concealed from the street by an imposing gated wall.

Paris: Life & Luxury in the Eighteenth Century By Charissa Bremer-David

Paris: The Novel By Edward Rutherfurd

The Golden Moments of Paris: A Guide to the Paris of the 1920s By John Baxter