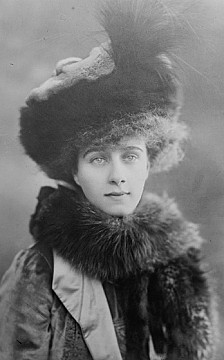 She was a niece of both Whitelaw Reid (1837-1912), the U.S. Ambassador to the United Kingdom, and of Mrs Cavendish-Bentinck, who as an elder American living in London had introduced many young American girls into English society. Beatrice and her sister, Gladys, were twins and both they and their brother, Ogden, inherited their father's passion for horse-racing. Therefore, on the face of it, it was perhaps no surprise when in 1909, Beatrice married another enthusiast of the turf, the Irish peer Bernard Forbes, 8th Earl of Granard, King George V's Master of the Horse.

There were rumors within the family that Beatrice had been in love with another man but her mother "encouraged" her towards the Earl, Lord-in-waiting to the King. Previous to that, many had been expecting the announcement of an engagement between Beatrice and the hugely wealthy power-boat racing Olympian, Thomas Scott-Ellis (1880-1946), 8th Baron Howard de Walden. But, for one reason or another, that never came to pass.

The Earl and Countess lived principally at Forbes House on Halkin Street in London's Belgravia. When Beatrice's father died in 1929, she inherited his French racing stables and his historic home in Paris, the Hotel de Broglie, which she renovated in 1970. When the Earl's ancestral seat, Castle Forbes, suffered a fire in 1923, she paid to renovate it. The Granards mixed freely within Royal circles and Beatrice developed a reputation as a political hostess for her husband who was a Liberal and Deputy Speaker of the House of Lords. She was an enthusiastic tennis player and a "daring" horsewoman, although she gave up hunting after the birth of her first child.

Beatrice was the co-founder and administrator of the Bathurst House Hotel for Officers on Belgrave Square in London. She was also President of the County Longford branch of the British Red Cross Society. For her efforts, she was awarded in 1920 with the Order of the British Empire (O.B.E.). When she died, she requested that some of her artwork was to be left to the Irish State. "The Granard Bequest" is comprised of a collection of paintings, oriental porcelain, antique French furniture and clocks etc. from the original collection at the Metropolitan Museum in New York and the Granard residences in Paris and County Longford. During her lifetime, Beatrice was well-known to the celebrated jeweller's, Cartier, and in 1937 it was commented that, "she could scarcely walk for jewels".