Completed in 1902, for Alexander Crombie Humphreys (1851-1927) and his wife Eva Guillaudeu. In its time it was considered one of the finest properties in what was dubbed the "Fresh Pond Colony" but by 1914 it had changed passed through three families. Its last owner envied the position more than the house itself and in 1916 a mysterious fire broke out and miraculously, the owner (F.W. Woolworth) had a new set of plans all ready for its replacement. The original architect was brought back and six months and $9 million later, the glimmering marble colossus that is Winfield Hall had taken its place, which is now one of the Gold Coast's grandest surviving estates....
zoom_in 6 images 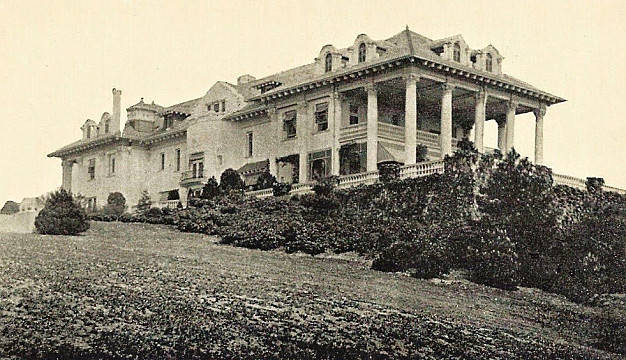 A. C. Humphreys, President of the Stevens Institute of Technology, New Jersey

Humphreys was a native of Edinburgh, brought up in America, and became among the most distinguished engineers of his generation. He founded a gas utilities company and among many other positions served as the second President of the Stevens Institute of Technology in New Jersey where "Humphreys Hall" is named in his honor.

In 1899, Humphreys hired the respected New York architect C.H.P. Gilbert (1861-1952) to build him a 26-room Spanish Mediterranean-style villa on a 16.5-acre estate atop a small hill, overlooking the bay with a private bathing beach. On a clear day, the Manhattan skyline could be view from the rooftop. But, after just five years (1907) the Humphreys' sold the mansion to Emmett Queen, an oil, coal, and railroad magnate with headquarters at Pittsburgh. He and his wife did not stay there long either, and in 1914 the estate was sold to the five-and-dime millionaire, Frank Winfield Woolworth (1852-1919).

According to legend, Woolworth was never overly fond of the house and in 1916 an unexplained fire broke out in either the billiard room or his valet's quarters and the villa was razed to the ground - aided by insufficient water pressure to douse the flames. $50,000 worth of furniture, paintings, books etc., were carried to safety, but the total loss to the Woolworth's amounted to $150,000, including the pipe organ in the music room which was valued at $20,000. Within weeks, Woolworth had re-hired Gilbert and built the eccentrically splendid Winfield Hall in its place.

History of Stevens Institute of Technology By Geoffrey W. Clark