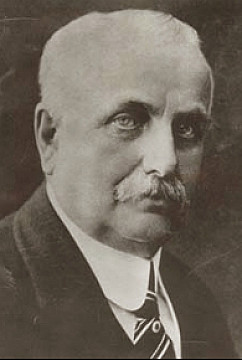 He was born on a small farm at Rodman, New York, and left school at sixteen. He struggled to find store work and even when he eventually did, he was considered a poor salesman. However, he soon found his talent was for arranging the shopfront window displays. In 1879, he borrowed $300 and set up a five-cent store in Utica, New York. It failed only weeks later and in August of the same year he opened a ten-cent store in Lancaster, Pennsylvania. By 1911, the F.W. Woolworth Company was incorporated with 586 five-and-ten-cent stores and by the time of his death there were more than a thousand stores in the United States, Canada, and Great Britain.

In 1913, he built the Woolworth Building in Manhattan at a cost of $13 million, cash. It was then the tallest building in the world and remains one of the most iconic in New York City. He built a townhouse in Manhattan that recently went on the market for $90 million and his estate on Long Island, Winfield Hall, also still stands. Towards the end of his life, he became obsessed with Napoleon, and time travel, as reflected in the decoration of Winfield Hall. In 1876, he married Jennie Creighton, who over time became mentally unsound which is sometimes attributed to her husband's treatment of her. They had three daughters: Mrs Helena McCann, Mrs Edna Hutton, and Mrs Jessie Donahue.

Remembering Woolworth's: A Nostalgic History of the World's Most Famous Five-and-Dime By Karen Plunkett-Powell

Five and Ten: The Fabulous Life of F.W. Woolworth By John K. Winkler