Built between 1340 and 1360, for Sir Thomas Cawne. From his daughter it passed to the Haute, then Clement families. In 1591, it was purchased by Sir William Selby (d.1612) M.P., and remained in the Selby family until 1890. From 1887 until it was sold in 1890, Ightham was leased to "Queen" Palmer and her daughters who moved here from Colorado for her health, where her husband would later build Glen Eyrie Castle in her memory. During her time here, 'Queen' entertained the leading literary and artistic ex-pats such as Henry James and John Singer Sargent who in 1890 painted Elsie Palmer here - "The Mona Lisa of Colorado Springs". Among Queen's other closest friends and a frequent visitor here was Kate Terry, grandmother of the great actor Sir John Gielgud....
zoom_in 10 images 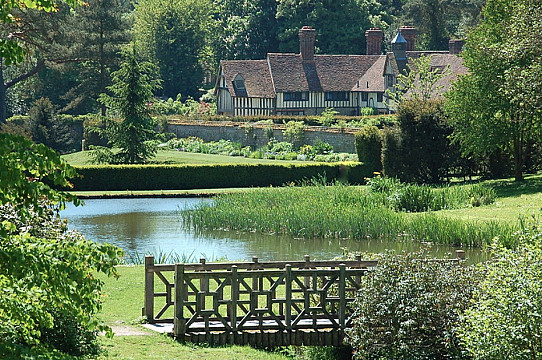 When Henry James stayed here over Christmas in 1887 he wrote that Queen Palmer gave, "a feast for seventy rustics, tenants of the Selby-Biggs, to whom she was under no obligation... the landlords have so long been poor and parsimonious that they (the lean estate tenants) hadn't, for generations, assisted à pareille fête, and the episode was very entertaining and successful. Seventy people were accommodated in the great high-roofed dining hall, and with our backs to the Yule log, we carved dozens of roast beefs, turkeys and plum puddings. There was a band in the court, a Christmas tree afterwards, and a dance, in costume, by the children of the house... the affair was organized, perfectly, by the village-innkeeper...". He stayed in the Tower Room of which he said: "I slept in a room with a ghost and an oubliette; but fortunately the former remained in the latter"!

Having been purchased in 1890 by Sir Thomas Colyer-Fergusson 3rd Bt., he carried out some much needed renovations and remained here until his death in 1951. However, the spectacular 14th century manor house was saved from dilapidation when it was purchased by Charles Henry Robinson (1892-1985) from Portland, Maine. Over a period of 30-years, he renovated the old manor before gifting it the National Trust shortly before his death.

Houses of the National Trust By Lydia Greeves