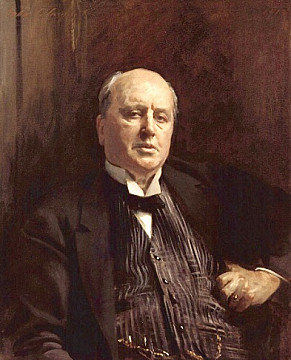 He was born at 2 Washington Place, New York City, near to his maternal grandmother at 18 (or 19) Washington Square North. His grandfather, William James, had died in 1832 leaving a $1.2 million fortune that allowed the family to pursue intellectual paths. From 1869, he relocated to Europe living first in England, then in Paris, before returning to Lamb House at Rye in East Sussex. He died at his London residence, 21 Carlyle Mansions on Cheyne Walk in Chelsea. In 1915, he became a British subject and was three times nominated for the Nobel Prize for Literature. In 1916, King George V awarded him the Order of Merit for his contributions to literature .

Despite his move to Europe, he was a central figure in American ex-pat life and was a close friend of Edith Wharton. He wrote 20 novels, 112 stories and 12 plays. His most famous books include, The American; The Portrait of a Lady; The Europeans; The Bostonians; The Ambassadors; The Turn of the Screw; Washington Square; and, The Wings of The Dove - in which he describes the Palazzo Barbaro in Venice which he loved so much. He was among the circle of the Earl and Countess of Rosebery and was a frequent visitor to Lansdowne House on Berkeley Square in London. He did not marry.

Portrait of a Novel: Henry James and the Making of an American Masterpiece By Michael Gorra