Built in 1900, for Ferdinand Blumenthal (1847-1914) and his wife, Cecilia Ulman (1863-1927). Having made his fortune in New York City by furthering the leather manufacturing reach of his family business back in Frankfurt, Blumenthal and wife retired to Paris. They knocked down the house that had belonged to the Comte de Ludre and built the existing 32-room (including 12 bedrooms), 10,200-square foot house as a showcase for their magnificent collection of art and antiques. It was designed in the style of Louis XIV by the same architect who designed the Sorbonne, Henri Paul Nénot. It includes a superb ceiling fresco by Henri Rousseau in the Banqueting Hall and fireplaces from the Palais Paar where Marie Antoinette was married by proxy to Louis XVI....
zoom_in 5 images 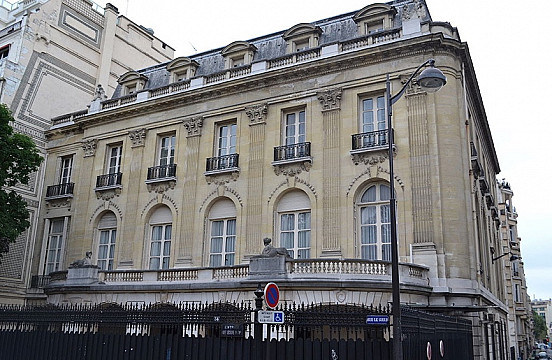 Three years after Blumenthal died in 1914, his widow remarried Louis de Talleyrand-Perigord, Duc de Montmorency. Aristocratic Parisiennes sneered at the union of one of their own to a Jewish-American bourgeoisie, and they gave Cecilia the derisive nickname of "La Duchesse de Montmorenthal". She died in 1927 and in that same year L'Hôtel Blumenthal-Montmorency was sold for 8-million francs to Simón I. Patiño, the "Tin King" of Bolivia also known as "the Andean Rockefeller" and then one of the five richest men in the world. He took up residence across the street at No. 30 and gave No. 34 as a present to his daughter, Graziella, whose husband, Jorge Ortiz Linares, was secretary to the Bolivian delegation at Paris and later (1947-1949) served as the Bolivian Ambassador.

As the Blumenthals had done before them, Jorge and Graziella filled their home with exquisite 18th century furniture and artwork. Graziella gained a reputation as the world's most serious collector of silver, notably French silver, and she was a popular figure in French society where her headstrong character was admired as well as her singing voice and guitar-playing. Both their sons would also become well-known art collectors, particularly George, though many might call him a looter rather than a collector.

During the Nazi occupation of Paris in World War II, the vast majority of the grand homes that lined Avenue Foch were requisitioned by the Gestapo and the once fashionable enclave was then dubbed "Avenue Bosch" or "Avenue de la Gestapo". Most accounts of L'Hotel Blumenthal-Montmorency brush over this period of its history, saying that it was only acquired by the Ortiz family after the war - which is of course twenty years away from the truth. It's not one hundred percent proven, but it would seem that Jorge and Graziella were among the handful of residents who were not evicted from their homes on the Avenue Foch. While Bolivia had broken diplomatic ties with Nazi Germany, Graziella's influential father was, "too friendly with the Nazis for British comfort" and was said to have played a large part in financing Franco's fascist victory in the Spanish Civil War.

Jorge died in 1965, and Graziella remained here as a widow for a further eight years before selling up to Saudi Arabia in 1973. Soon afterwards, it was purchased by Mahdi Al Tajir, the United Arab Emirates Ambassador to France (1971-1980) and the U.K. (1971-1987). Tajir is also a businessman worth about $2 billion and as the owner of an extensive collection of silver and carpets he continued the tradition set by the previous owners.

In 2011, Tajir placed it on the market for $136 million, which if it had sold at that amount (the Chinese and Russians were reportedly interested) would have made it the most expensive property to ever have changed hands in Paris. Perhaps not altogether unsurprisingly with such a price tag, it was then advertised as the "Palais Montmorency" - even if the Duke not only had the shortest lifespan here, but never actually owned it either! Despite the marketing, the 'Palais' appears to still be in the possession of Mr Tajir.

Les Parisiennes: Resistance, Collaboration, and the Women of Paris Under Nazi Occupation By Anne Sebba

Americans in Paris: Life and Death Under Nazi Occupation By Charles Glass

Goering's Man in Paris: The Story of a Nazi Art Plunderer and His World By Jonathan Petropoulos

The Paris Library: A Novel By Janet Skeslien Charles

Avenue of Spies: A True Story of Terror, Espionage, and One American Family's Heroic Resistance in Nazi-Occupied Paris By Alex Kershaw

The $12 Million Stuffed Shark: The Curious Economics of Contemporary Art By Don Thompson