Simón I. Patiño, "Tin King" of Bolivia, "the Andean Rockefeller" 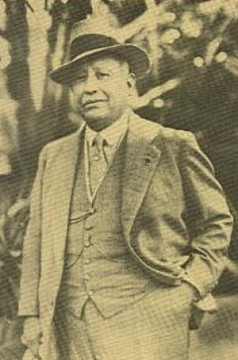 He was born to a poor family in the Cochabamba Valley. He moved to Oruro in 1894 to work in a mining supply store. A year later, he bought a share in La Salvadora mine and three-years later used the profits to buy out the majority owner which gave him control over what transpired to be one of the largest deposits of high-grade tin in the world. According to legend, in the early days, he and his wife dug the ore out with their own hands before taking it down the hill in wheelbarrows and then transporting it across the country in llama trains. Then, in 1900 Patiño struck one of the richest veins of ore ever found in Bolivia, which sealed his fortune. With the profits he bought up further mines and within 15-years controlled half of Bolivia's tin output which simultaneously made him the country's most important private banker - with an income greater than that of the Bolivian government. He expanded his empire internationally, buying mines and foundries in Asia, Africa, Germany, the USA and Britain.

His business soon controlled production for about 35% of the world’s tin and played a crucial role in setting international prices. By the early 1920s his fortune was estimated at $100 million, placing him among the five richest men in the world, but his reputation as an employer was of the lowest rank. Despite his wealth, Patiño was never accepted by the Bolivian elite and when he was barred from joining Cochabamba's exclusive Spaniards' Club Social, "enraged and embittered," the Patinos left Bolivia for good in 1924. He established his corporate headquarters in New York but otherwise divided his time between London, their mansion at 30 Avenue Foch in Paris (opposite L'Hotel Blumenthal which he bought for his daughter), Chateau de Valrose at Nice, a villa near Biarritz, and a yacht. Politically, he was rumored to have helped finance Franco’s victory in the Spanish Civil War and during WWII he was, "too friendly with the Nazis for British comfort". Despite public outcry, he outlived having to nationalize his mines and died in Buenos Aires one of the most influential - if controversial - figures in Bolivian history.