Built 1931, for Lester Armour (1895-1970) and his first wife Leola Stanton (1891-1980). Their 47-room mansion was designed by Leola's friend David Adler (1882-1949). Neither Lester nor Leola made any changes to the original architectural plans put forward by Adler and as such this house is considered to be one of Adler's purest works on show today. The film A Wedding (1978) starring Mia Farrow and directed by Robert Altman was shot here almost exclusively over an 8-week period. Adler also built Suffield House for Lester's widowed aunt which featured in the film Class (1983)....
zoom_in 3 images 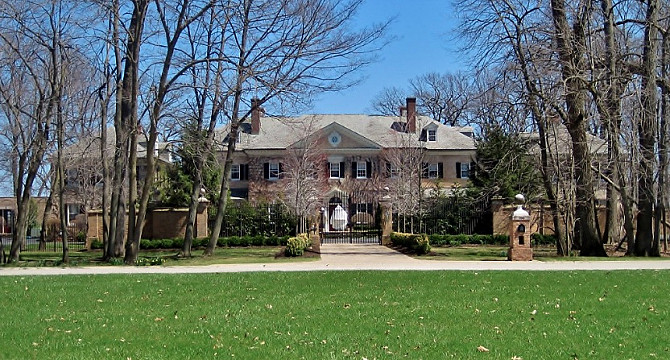 Lester Armour worked for the family meat-packing business (Armour & Company) until its cataclysmic demise under his uncle, J. Ogden Armour. Lester then went into banking, becoming President of the Chicago National Bank and Chairman of the Harris Bank.

Set on a five-acres of grounds overlooking Lake Michigan, his 3-story Georgian-style mansion has 11-bathrooms and 19-fireplaces. David Adler's design for his mansion was inspired by a recent trip with Evelyn Marshall Field to Virginia, touring the great plantation houses sited along the James and Potomac Rivers. The Armour house was also one of the few that Adler designed in conjunction with his sister, the noted interior designer Frances Adler Elkins (1888-1953).

The Armours divorced, but Lester remained in the house and was joined in 1949 by his second wife, Princess Alexandra Pavlovna Galitzine (1905-2006), the widow of Prince Romanov, great-grandson of Tsar Nicholas I of Russia. "Aleka" also outlived her second husband, Lester, but continued to call their house 'home' until 1977 when she leased it to Lion's Gate Films to feature in the movie A Wedding (1978) starring Mia Farrow and directed by Robert Altman. The film was shot here almost exclusively over an 8-week period. Initially, the Princess refused to allow her home to be used, but when the Chicago Rehabilitation Institute asked her to raise $300,000 for their charity, she changed her mind and the production company agreed not only to donate $40,000 to the charity, but also promising to hold the world premiere as a charity benefit for the Institute.

After filming, Alexandra subdivided her 73-acre estate into 15-lots of roughly 5 acres each. On May 3, 1984, the house was recognized by the National Park Service and added to the National Register of Historic Places. In 1997, musician Richard Marx bought the house for $4.7 million. In 2014, it was on the market for $18 million. It remains a private home.