Built in 1934, for Mrs "Lolita" (Sheldon) Armour (1869-1953), the widow of J. Ogden Armour (1863-1927). Set in six acres of gardens, this elegant, Adler-Elkins designed mansion on Green Bay Road, south of Deerpath, still remains a private family home. It was built with money clawed back by the widow of the man who will go down in history for making, then losing - in a just a decade - an estimated $150 million! It was Lolita's savvy investments following his death that allowed her to build this mansion that housed her magnificent collection of historic shoes, now at Chicago's Art Institute. Suffield House was most recently brought back into the limelight when it featured in the movie, Class (1983), as the family estate of Skip Burroughs IV, played by Rob Lowe....
zoom_in 4 images 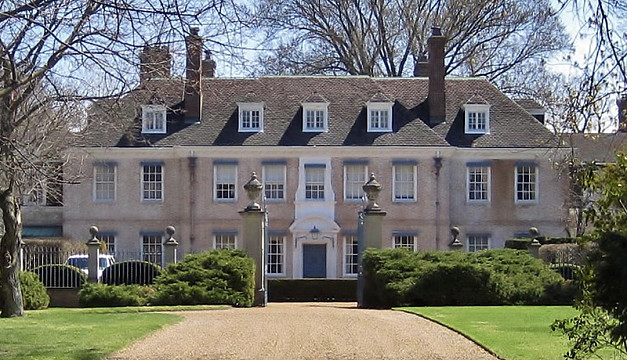 Ogden's father had started the successful meat-packing business in Chicago to which he became sole heir in 1901. Unlike his father, he wasn't a natural businessman, but while at the helm of Armour & Co., he rode the wave that by the end of World War I saw the business turn over, not millions, but a billion dollars a year, making it the most profitable corporation in the country. It was then said that if J.P. Morgan dictated how Americans banked, it was J. Ogden Armour who dictated how Americans ate, and what they paid to eat. By 1920, Ogden's personal fortune was worth in excess of $100 million.

However, whereas Ogden's father had correctly predicted the end of the Civil War - tying down contracts and meat prices which rocket-propelled the company's profits - Ogden incorrectly predicted that the Great War would roll on. Then, he incorrectly predicted that Germany would rise quickly from the ashes, leaving Britain in the dust. Relieved of his duties as President of Armour & Co., but in need of making money fast to maintain his now over-stretched lifestyle, he invested heavily in the wheat market and... lost, again. A long time friend said that he, "lost more than $100 million for the family and the meat-packing firm on the wheat speculation alone, and another $50 million through the Armour Grain Co." He died in 1927 with just $25k and a handful of "worthless" shares.

But, if Ogden's luck had run out, his widow wasn't quite done yet as some of those shares turned out to be not so useless after all. In 1932, Lolita sold her interest in the Chicago Tunnel Corporation and used the proceeds to buy the north-east corner of State & Madison, later dubbed the "world's busiest corner". In just a few years, Ogden's savvy widow re-glossed the family name and made herself a multi-millionaire in the process.

Having reinstated herself to the manner in which she was accustomed to living, and with money to spare, Lolita turned her thoughts towards a new, very female, home. The design of this classical French-style mansion was a collaboration between the renowned brother-sister architect-designer team, David Adler (1882-1949) and Frances Adler Elkins (1888-1953). Lolita had come to know Adler through her nephew's wife, Mrs Leola (Stanton) Armour (1891-1980), who'd commissioned him to build the Lester Armour House.
After the rollercoaster journey Lolita had been through with her late husband, it was perhaps no surprise that her new home was so focused on herself. In stark contrast to the other mansions they'd owned, this one was entirely to her style and taste. Neither in the name was their any hint towards it being an "Armour" house. She named it "Suffield House" for her birthplace in Connecticut and where her family had lived since their ancestor, Captain Jonathan Sheldon (1687-1769), had bought 1,100-acres there in 1723.

Her new 12-bedroom mansion was set in 18-acres of formal gardens with a 55-foot oval swimming pool. Stylistically, it is often described as Neo-Georgian, but excepting the entrance, the design lends itself almost entirely to that of a neo-classical French chateau. It is noted for its steep, blue-slated roof and the distinctive pink hue of its stone. Aside from her wonderful antiques, it housed her even more wonderful collection of historic shoes. The collection included those worn by England's Queen Anne (1655-1714) and another pair that "had danced a minuet at the court of King Louis XIV (1638-1715)".

The reception rooms on the ground floor are interconnected by a columned gallery and incorporate several styles: the English Queen Anne dining room is lit by a pair of crystal chandeliers and a baroque mantelpiece carved by Grinling Gibbons (1648-1721) surrounds the fireplace. Lolita's dressing room is panelled with 15th century Chinese oil paintings and it was here that she no doubt kept her collection of historic shoes that she willed to the Art Institute of Chicago. Other rooms worthy of note include the bathroom with its gold-leaf tile bath; and, the flower arranging room - yes, specifically for flower-arranging!

Mrs Armour died at Suffield in 1953, leaving an estate worth $7.3 million. The house was left to her only daughter, Lolita Armour (1896-1976), who was then just divorced from her first husband, John James Mitchell Jr. (1897-1985), a co-founder of United Airlines. In 1958, for a reported $350,000 as part payment for an hotel and resort in California, Lolita sold the house to Frank Keenan, of Chicago, a Cook County Assessor, who immediately planned to dispose of the property stating: "I couldn't afford to live there".

Suffield was used in the film Class (1983) starring Rob Lowe, as his character's family estate with the fictitious address of 65 Spring Creek Road, Barrington Hills. Since 1958, the eighteen acres of grounds have been reduced to six, and though it is unclear who has lived at Suffield since then, it remains a private family home.

Miniature Rooms: The Thorne Rooms at the Art Institute of Chicago By Fannia Weingartner. Introduction by Bruce Hatton Boyer