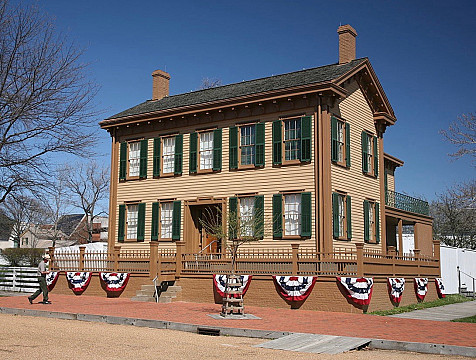 Dresser was a personal friend of Lincoln's and in 1842 he presided over Lincoln's marriage to Mary Todd (1818-1882) at the nearby home of her brother-in-law, the politician Ninian Wirt Edwards (1809-1899). The newly weds lived at the cramped Glebe Hotel until 1844 when Lincoln paid Dresser $300 for the lot of land and $1,200 for the house itself. There was a $900 mortgage attached to the house that was cleared within a few months of the purchase: Lincoln, "reckoned he could trust the preacher that married him".

In 1847, Lincoln's career took him and his family to Washington D.C. and they rented the house for $90 a year to one Cornelius Ludlum, and afterwards to Mason Brayman, who lived there until 1849. From then until Lincoln was elected president in 1861, they lived simply and permanently at their home. The only change was made in 1856 when Mary raised the height of it, making it a two-story residence.

In 1861, the year in which Lincoln became President, they leased their home for $350 a year to Lucian A. Tilton (1812-1877), the retired President of the Great Western Railroad, who lived there with his wife Lucretia Jane Wood (1824-1906). During the Civil War the Tiltons did much for the soldiers and slaves who had fled for the north, and when news reached them that Lincoln was dead, they draped the house in black crepe.

After Lincoln's death, his eldest son, Robert Todd Lincoln, assumed management of the property, buying out his mother's share in the property for $500 in 1874. The Tiltons had removed to Chicago in 1869, though a legend exists that Mrs Tilton still haunts the old house. Even by then, the Old Lincoln Homestead (as it was then known) had become something of a national shrine and Robert Lincoln found it necessary to add into the tenancy agreement that all reasonable visitors should be allowed into the house.

After the Tiltons, the house was leased to Colonel George Henry Harlow (1830-1900), Secretary of State for Illinois. Robert held on to the house for sentimental reasons, making next to nothing from renting it out, and when Harlow offered to buy it, Robert had already made up his mind, "to own the house till it ruins me". For two years from 1877, Jacob Akard displeased Robert by keeping it as a boarding house. The next tenant, Dr Gustav Wendlandt, remained there until 1883. Finally, from 1884, the house was rented to Osborn Oldroyd, a failed businessman who had become an avid collector of all things 'Lincoln' - though Robert referred to him as a "dead beat" and a "rascal".

Finally, in 1887, Robert was persuaded by Oldroyd to deed the house to the State of Illinois for the nominal sum of $1, with Oldroyd occupying the upper floor as custodian. The conditions set by Robert Lincoln stated that it was to be always well-maintained and open to the public at no charge. No changes have been made to the interior of the house since the Lincolns left it, but only a few furnishings that belonged to him remain, including his favorite rocking chair. Each of the twelve rooms have been restored with authentic furniture from the period that the Lincolns lived there.