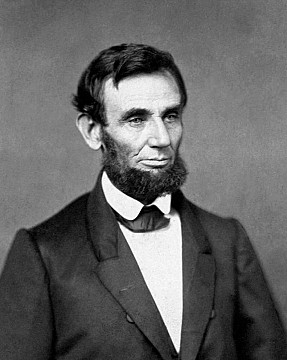 He was preceded in the Presidency by James Buchanan but after being successfully re-elected for the Republican Party in 1865 he was famously assassinated. He was succeeded by his Vice-President, Andrew Johnson, while Hannibal Hamlin had served as his Vice-President during his first term in office.

He was born in a one-room log cabin near Hodgenville, Kentucky. He grew up in extreme poverty and had no formal education but was a voracious reader. He left home in 1831 and first entered politics in 1832. Although he was a compelling orator, he failed to be elected to the Illinois General Assembly, lacking education, connections, and ultimately money. His second attempt in 1834 was successful and he was elected as a Whig to the Illinois House of Representatives, serving four successive terms. He opposed slavery but sided with Henry Clay, favoring the American Colonization Society and migration to Liberia over abolitionism. In 1836, he was admitted to the Illinois Bar and by 1844 he was able to purchase the Lincoln House in Springfield.

In 1847, he was elected to the U.S. House of Representatives, serving a two year term. From 1849, he focused on his legal career at Springfield, earning his sobriquet "Honest Abe". He returned to politics in 1854, joining the newly formed Republican Party which dedicated itself to antislavery. His speech at the Cooper Union in New York elevated his political presence among the Republicans and he won the 1860 Presidential election to become the 16th President of the United States. However, his support came entirely from the north and west. He won just two out of the 996-counties in the Southern States.

In 1861, less than a month into his Presidency, Confederate forces opened fire on the Union Army at Fort Sumter. In 1862, Lincoln signed the Emancipation Proclamation making the abolition of slavery in rebel states a military objective for the Union Army. He was re-elected as President in a landslide victory in the 1864 Election, winning all but three states and 78% of the Union Army's vote. Less than a month after his second inaugural speech, Lincoln accepted General Robert E. Lee's surrender at Appomattox, bringing an end to the Civil War. Two weeks later, Lincoln was assassinated.

Lincoln, Washington, and Franklin D. Roosevelt are viewed as the three most important Presidents in U.S. history. In 2004, scholars of history and politics ranked Lincoln number one, while legal scholars placed him behind Washington. The Republican Party claim him as their own, but he is also a favorite of Liberal intellectuals across the world. Allen C. Guelzo, Professor of the Civil War Era at Gettysburg College described Lincoln as, "a classical liberal democrat - an enemy of artificial hierarchy, a friend to trade and business as ennobling and enabling". Lincoln was survived by his widow, Mary Todd, to whom he was married in 1842. They had 4-sons, but only Robert reached adulthood.

Team of Rivals: The Political Genius of Abraham Lincoln By Doris Kearns Goodwin

Abe: Abraham Lincoln in His Times By David S. Reynolds

The Lincoln Conspiracy: The Secret Plot to Kill America's 16th President - and Why It Failed By Brad Meltzer & Josh Mensch