Built in 1759, for John Vassall (1738-1797) and his wife, Elizabeth Oliver (1744-1807). Mrs Vassall was the sister of Thomas Oliver, the last Royal Lieutenant-Governor of Massachusetts, and being Loyalists, on the outbreak of Revolution they left Cambridge and their property (this house and its accompanying 150-acres) was confiscated. In July, 1775, George Washington requisitioned the house as his headquarters and lived here throughout the Siege of Boston until April, 1776. In 1791, it was purchased by the former Apothecary-General to the Continental Army, Andrew Craigie, and soon became known as "Craigie Mansion". He and his wife gained a reputation as people who, "entertained without regard to expense... kept dozens of servants and well stocked stables and wine cellars". Among the many notable guests who dined and danced here was Queen Victoria's father, the Duke of Kent & Strathearn. After Craigie died, their extravagant lifestyle caught up with his increasingly eccentric widow, Betsy, who after selling much of their art and furniture to cover debts ended her days here taking in boarders....
zoom_in 5 images 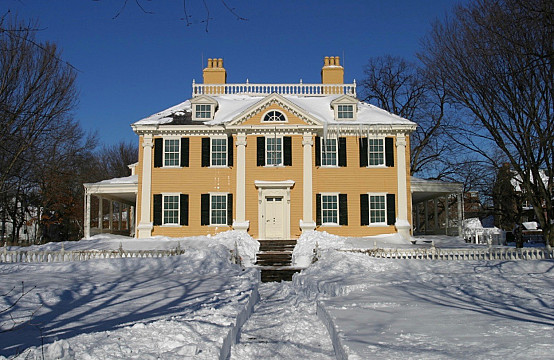 Andrew Craigie, of Cambridge; Apothecary-General to the Continental Army

Fanny died in 1861 and Longfellow remained here until his death too, in 1882. Their philanthropic daughter, Alice, was born here and after her father's death she lived here until her own in 1928. In 1913, she and her siblings created the Longfellow House Trust which maintained the home and allowed future Longfellows to live here if they so wished. In 1972, the trustees transferred ownership to the National Park Service allowing it to become a National Historic Site. The house is almost entirely unchanged from the time when it was home to the great poet and since 1972 it has been open to the public.

Cross of Snow: A Life of Henry Wadsworth Longfellow By Nicholas A. Basbanes

Longfellow in Love: Passion and Tragedy in the Life of the Poet By Edward M. Cifelli