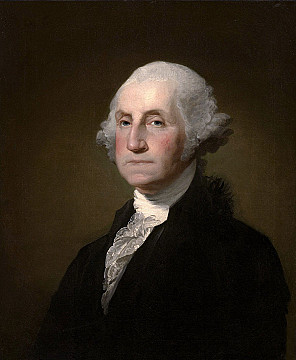 He was born in Virginia where his family came in 1656 as tobacco merchants. At the age of 20, he was appointed a Major in the Virginia Cavalry and played a conspicuous role in the Colonial Wars, negotiating truces with both the French and the Iroquois. In 1754, he was promoted to Lieutenant-Colonel and his first action against an inferior French force sparked the French & Indian War (1754-1763). His role during that war gave him valuable experience of British tactics, and a disdain for their military having been passed over for promotion. His marriage in 1759 to the widowed Mrs Martha (Dandridge) Custis (1731-1802) made him one of the wealthiest men in Virginia.

He was elected to the Virginia House of Burgesses in 1761 and after peace was declared devoted himself to running his plantation, Mount Vernon. As tensions rose over the British government of America, Washington became an increasingly belicose critic of the Crown. Nonetheless, he was "sobered and dismayed" when war broke out in 1775. He was the Virginia delegate to the Continental Congress and was voted Commander-in-Chief of the Continental Army. The war was concluded with his defeat of the British at Yorktown and after signing the Treaty of Paris in 1783 Washington resigned his command.

Having returned to Mount Vernon, his strong leadership was called upon again and he was voted the 1st President of the United States of America, serving two terms until 1797. He established a strong government, remained neutral during the French Revolution, and sanctioned the Jay Treaty to resume trade with Britain. His Farewell Address is widely regarded as a pre-eminent statement on Republicanism. He was succeeded by John Adams. He died without children of his own and his stepson, John Parke Custis, predeceased him.  His principal heir then became his stepson's only son, George Washington Parke Custis. Coincidentally, George Custis' daughter, Mary, married Confederate General Robert E. Lee.

Washington: A LIfe By Ron Chernow