Built 1928-29, it was first purchased by Captain Charles Hamilton Maddox (1886-1964) of the U.S. Navy, and his wife, the heiress Isabel Ramage (1890-1988). In 2017, this 8,122 square foot mansion overlooking Rock Creek Park in Kalorama made the headlines when it was purchased by former U.S. President Barack Obama and his wife Michelle as a family home. It is loosely described as being a brick house with "Tudor features," though it could be perhaps better classified as showing strong elements of the Arts & Crafts movement that was popular back in the 1920s....
zoom_in 1 images 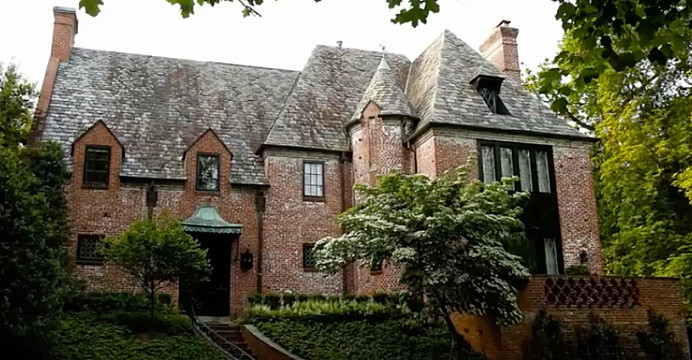 2446 Belmont Road stands on a private lot of 15,000 square feet and was constructed at an estimated cost of $50,000. On completion, it was described as a "two-story and basement brick and hollow tile dwelling... a spacious residence, attractively designed" and "completely furnished with original antiques by George W. Reynolds".

It was put by F. Moran McConihe (1905-1989), of F.M. McConnihe & Co., Inc., a well-known real estate developer in the Belmont Road-Kalorama neighborhood. He later advised President Dwight Eisenhower on the demolition of former government buildings and then served as Eisenhower's administrator of public buildings for the General Services Administration. His father, Malcolm Stuart McConihe Sr. (1871-1961), was a former Democratic National Committeeman for the District of Columbia.

After the Wall Street Crash, the house sat empty for a year or two before it was sold to Charles Hamilton Maddox and his new wife, Isabel Ramage. Charles was born in Ontario, Canada, but graduated from the U.S. Naval Academy and later the Harvard Graduate School of Applied Science and the Massachusetts Institute of Technology. He was a veteran of both World Wars but is perhaps best remembered as the man who designed the system and then sent the first air-to-sea message in 1912.

Mrs Isabel Maddox was the youngest daughter of Samuel Young Ramage (1853-1940), a wealthy industrialist and financier of Oil City, Pennsylvania. Charles and Isabel Maddox lived at 2446 Belmont for well over thirty years, as well as keeping a summer house, Easterly, at Newport, Rhode Island. They were the parents of three children, notably Mrs Muriel (Maddox) Ribbey (1921-2010), an actress who once shot a movie with Marlon Brando and later became a well-known author of romance novels.

In about 1970, Mrs Maddox sold her Washington home to C. Woods Vest Jr. (1927-2006) and his wife Susan Wilkoff (d.2017). Cecil Vest was the public affairs and conference officer in the Bureau of Public Affairs in Washington. They also kept a summer house, Wood's Hole, at Frederiksted in the Virgin Islands. Having been their family home for over 40 years, in 2009 the widowed Mrs Susan Vest sold 2446 Belmont for $4,350,000.

The new owner was Joe Lockhart (b.1959), best known as the 19th White House Press Secretary during the administration of Bill Clinton between 1998 and 2000. From January, 2017, he leased the house to former President Barack Obama immediately after stepping down from the White House. The Obamas rented the house for several months before purchasing it in late 2017 for $8.1 million. Their three-story home was recently renovated before they made the purchase and contains 9 bedrooms and 8.5 bathrooms.

Kalorama Triangle: The History of a Capital Neighborhood By Stephen A. Hansen

Dreams from My Father: A Story of Race and Inheritance By Barack Obama

Llantarnam: A Novel By Muriel Maddox