First occupied from November 1, 1800, by John Adams (1735-1826), 2nd President of the United States, and his wife, First Lady Abigail (Smith) Adams (1744-1818). Construction started in 1792, but it was not actually officially completed until 1830, shortly after the 7th President, Andrew Jackson (1767-1845), moved in. However, it is generally agreed that Charles McKim’s 1902 renovation produced the look that characterizes the house today. It covers 55,000 square feet over 6-stories with 132-rooms and is the official residence of the President of the United States. Margaret Truman (1924-2008) described it is as, “the place where America’s pride and dignity are displayed”....
zoom_in 3 images 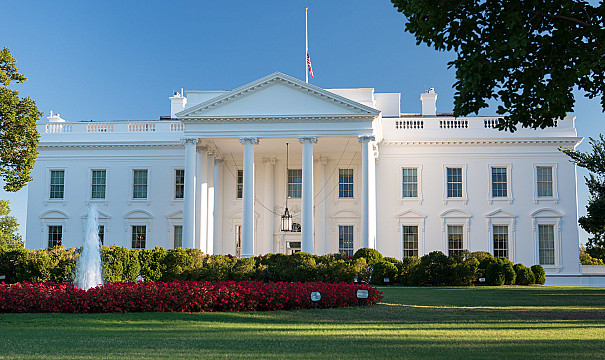 In 1791, while laying out his plans for the new capital, the notoriously prickly Pierre Charles L’Enfant (1754-1825) designed a Presidential mansion that was more aligned to a Royal palace. He envisaged a palace some five times the size of today’s White House set  within 80-acres of its own landscaped gardens, to be known as "President’s Park". George Washington (1732-1799) supported his plan, but the Democrat Thomas Jefferson (1743-1826) viewed it as a garish "monstrosity" more likely to inspire its occupants to behave like the old despotic monarchs of Europe rather than democratic leaders of a new land.
To satisfy all sides, it was agreed that a competition should be held to design the "President's House". Jefferson - an amateur architect who’d designed his own home, Monticello - entered anonymously, but lost out to one James Hoban (1755-1831), an Irish immigrant whose work in Charleston had caught Washington’s eye. It is generally agreed that the competition was rigged - Washington knew full well who he intended to win!

Hoban's winning design was inspired by Dublin's Leinster House and influenced by his own work for the Charleston County Courthouse, South Carolina. Washington managed to persuade the committee to enlarge and gentrify Hoban's original plan, but accepted that they could not afford to build it entirely of stone and therefore behind the outer sandstone walls it is constructed with bricks. The sandstone was whitewashed and within a short period of time people referred to it as the "White House" – it was only painted with lead paint during the tenure of James Monroe in 1817. However, it was not until 1901 that President Theodore Roosevelt officially christened it "The White House".

The Residence: Inside the Private World of the White House By Kate Andersen Brower

Upstairs at the White House: My Life with the First Ladies By J. B. West with Mary Lynn Kotz

The Hidden White House: Harry Truman and the Reconstruction of America’s Most Famous Residence By Robert Klara