Completed by 1712, for Thomas Cary (1667-1716), a merchant from Virginia who in partnership with his father became one of the leading tobacco merchants of his era, operating between Virginia, Maryland, the West Indies and Europe. The mansion was designed by one of the leading architects of the English Baroque style, Thomas Archer (1668-1743). It remained in the Cary family until about 1814, before which it had been leased as a summer home to various dignitaries such as William Markham (1719-1807), Archbishop of York, and William Keppel (1772-1849), 4th Earl of Albemarle....
zoom_in 2 images 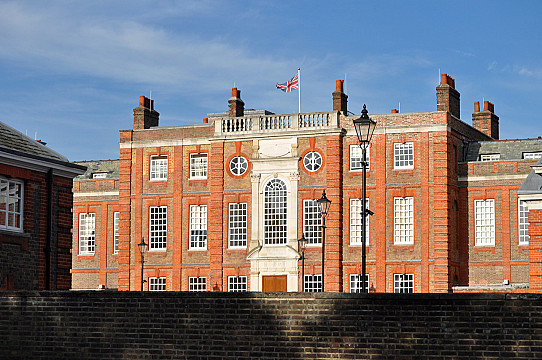 George Cary sold it to one William Duncan who leased it to John Pearse (1760-1836), Governor of the Bank of England. By 1850, it was in the possession of Alexander Leslie-Melville and it was here that his nephew Lord Balgonie (only son of the 8th Earl of Leven) died in 1857 from the hardships he suffered in the Crimean War. The widow of the 11th Earl (Jane Thornton) added a wing in 1859 (since demolished) and lived here until 1887. In 1910, the Levens sold up to the Anglo-Canadian merchant banker, Arthur M. Grenfell, who employed Sir Edwin Lutyens from 1910 to 1913 to add the north and south wings.

Colonel Arthur M. Grenfell (1873-1958) was the son-in-law of Earl Grey, Governor-General of Canada, and had made a fortune banking in Canada. Lutyens' alterations tripled the size of his new home and Lutyens achieved this by closely following Archer's original lines. The end result immediately enhanced the overall balance of the building. Unfortunately, before the interiors were finished, Grenfell was declared bankrupt. In 1914, he sold Roehampton and its 30-acres to Kenneth Wilson of Cannizaro Park, Wimbledon.

Wilson leased the house free of charge to the War Office and in 1915 it was given for use as a hospital for amputees. In the same year, the American banker J.P. Morgan Jr. donated his father's house next door, Dover House, and they became known as Queen Mary's Convalescent Auxiliary Hospitals, providing some 300 beds for soldier's who'd lost limbs on the battlefield. Roehampton House remained as a hospital until 1983. In 2010, Berkeley Group Holdings Plc began work to convert the property into 24 apartments and houses.