Built circa 1797 and named for George Agar-Ellis (1797-1833), 1st Baron Dover. He was the eldest son of an Irish peer and described as, "very clever" but "superficial" and "very conceited". He was President of the Royal Society of Literature and a Trustee of the British Museum and the National Gallery etc. It was then described as, "a handsome villa in charming grounds... famous for its social and literary gatherings". He died aged just 36 and the house eventually came to his son, Henry Agar-Ellis (1825-1866), 3rd Viscount Clifden. Lord Clifden was a well-known racehorse owner and after his death the estate was purchased by "the notorious" Alexander Collie (1824-1895). Collie came from humble beginnings in Scotland and made a fortune in London as a blockade-runner for the Confederacy in the U.S. Civil War. But, he went bankrupt in 1875 and disappeared owing over £2 million, leaving his business partner - his own brother - to face the music! Dover was then bought by the father of "America's Greatest Banker" J.P. Morgan....
zoom_in 4 images 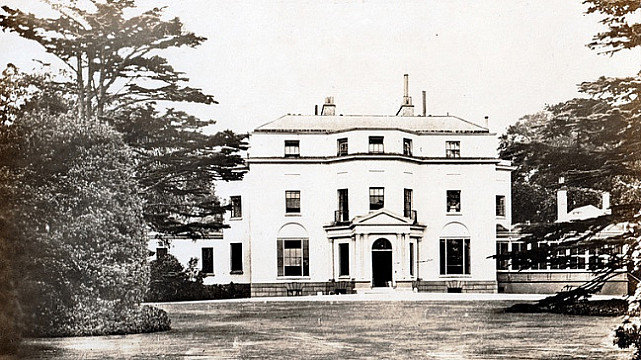 In 1865, Alexander Collie had drawn £123,103 (just short of a million dollars) from company funds to furnish Dover House with his art collection. In 1875, a warrant was out for his arrest and all his possessions including a full set of Sir Walter Scott's Waverley Novels and a pair of Purdey shotguns were sold at auction. In 1895, Alexander Collie, aged 51 and an invalid, ended his days in the Colonial Hotel on 125th Street, New York. The one-time millionaire known to every man of influence in Europe and the Confederacy had been evicted from his apartment in Harlem and died all but friendless in abject poverty.

One Man's Loss is Another Man's Gain...

J.P. Morgan's father, Junius Spencer Morgan (1813-1890), was a proud American but as the newly appointed partner in the well-known banking concern of George Peabody & Co., at London, he lived in England without stepping foot in America from 1854 to 1877. He lived between his townhouse at 14 Prince's Gate and having for some years leased Dover House (conveniently just a twenty-five minute drive from his Hyde Park home) he snapped it up for a bargain in 1875 when Collie's luck ran out. In 1912, The New York Times wrote,

(Dover House) was bought and furnished by the elder Morgan in the mid-Victorian era. Although the son has in later years added vastly in the grounds surrounding the old house, and now owns many acres... not a thing has been changed in the furnishing of the house. One room has been repapered, the story goes, and that is all wherein the place differs from its aspect during the years when father and son lived together. The heavy Victorian furnishings remain, black walnut, antimacassars, passementerie, and all.

Dover House was situated just one mile from Putney Station and stood on an estate of 140-acres on which Junius kept a herd of his prized Jersey cattle, continued by his son. Junius was said to have been as proud of the fruit and vegetables that came from the well-tended gardens and orchards at Dover House as if he had tended them himself.

"In England... the human side of the man comes out of its shell"

Junius died in 1890 and his English properties passed to his son, "America's Greatest Banker," J. Pierpont Morgan. When seen on Wall Street, J.P. Morgan was a lone-wolf, never seen in the company of others, eyes always fixed rigidly in front, and wary of all - he detested being noticed. But, when in England, he softened and revealed his human side.

It is not an uncommon sight in England to discover the Great Man of Wall Street riding about in his motor car with a tiny Pekingese spaniel in his lap, or walking about the grounds of Dover House, his big suburban estate out Putney way from London, with the same dog tucked under his arm. This is "Sing," the successor of a Pekingese given him by Lady Gordon-Lenox some years ago. The original "Sing" was the beginning of a whole brood of tiny dogs now kept at Dover House. This little fellow became the inseparable companion of his master, even being privileged to a lap-seat at quiet dinners.

His country house - like his townhouse - contained "well-proportioned" reception rooms filled with art and antiques from his famous collection which was valued at $50 million. Dover contained 20-bedrooms and although he may not have updated the decor since his father's time, in contrast to those mansions still owned by the English aristocracy it was however, "fitted with every up-to-date requirement" just like Carnegie's Skibo Castle.

Morgan was a man of habit. After visiting France, Italy, etc., he would arrive in London for the start of the season in May and here he would stay until July and the start of the season in Bar Harbor. Nonetheless, according to legend, his staff were never precisely informed when Morgan might arrive and so to cover themselves dinner was prepared for him every evening, though "the butler had to eat it in his stead six nights out of seven"!

While in England, he preferred to spend as much time as he could at Dover House and at the end of each day in London, he would travel the 25-minutes down to Roehampton.

It is at Dover House that the famous Morgan strawberries are grown. They are famed as the most luscious in England, and English strawberries are the best in the world. There may be acres under the glass in these suburban gardens. The Morgan greenhouses are famous around London, and it is said that of all they produce strawberries and tomatoes are what chiefly delight the owner. Mr. Morgan proves his fruit with his appetite. Breakfast is a serious meal with him, and it is said that he consumes gargantuan quantities of strawberries and cream as a starter, following with cereal, eggs, bacon, and successive breakfast courses enough to feed a Cornish giant, all interspersed with never-omitted sliced tomatoes. For tomatoes may be said to be the financier's staff of life. He eats them all year round, according to tradition, and no meal is complete without them.

Morgan died in March, 1913, and his son and heir, Jack, was already content with his own English estate, Wall Hall in Hertfordshire, just north of London. In January, 1914, it was announced that Dover House was to be sold and its value was placed at somewhere between $500,000 and $750,000, chiefly because of its vast potential for development.

As World War I raged across the English Channel and having seen Dover's neighboring estate, Roehampton House, given for use as a hospital for amputees, Jack Morgan donated Dover House for the same purpose. Queen Mary gave her permission for both to be named "Queen Mary's Convalescent Auxiliary Hospitals" affiliated to the King George Hospital on Stamford Street. Dover House opened as a hospital in July, 1915, with 20 beds but soon both Dover and Roehampton were able to provide beds for some 300 men.

In 1919, Dover House was purchased by the London County Council who proposed building 1,200 new homes on the combined 147-acres of parkland that had belonged to the Dover House and Putney Park House estates. In 1923, Dover House was demolished as part of the project inspired by the Garden City Movement and today only the gate lodge stands.